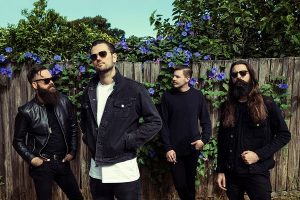 Alice Cooper, the architect of shock-rock, returns to Australia later this year to celebrate the 40th anniversary of his first ever concert tour of Australia.  In what is sure to be rock event of the year, Alice will be joined by the original KISS “Spaceman” Ace Frehley, as Very Special Guest, playing KISS classics and his solo hits.  The pairing of Alice and Ace brings together these highly respected icons of rock and roll!

The tour commences in Perth on October 17 and concludes in Brisbane on October 25, showcasing an immense body of work across the catalogues of both artists.

Alice Cooper pioneered a grandly theatrical brand of hard rock that was designed to shock.  Drawing equally from horror movies, vaudeville, and garage rock, the group created a stage show that featured electric chairs, guillotines, fake blood and boa constrictors. He continues to tour regularly, performing shows worldwide with the dark and horror-themed theatrics that he’s best known for.

Alice’s catalogue of hits and anthems, including “I’m Eighteen”, “No More Mr Nice Guy”, “School’s Out”, “Elected”, “Poison”, “Department of Youth”, “You and Me”, “How You Gonna See Me Now”, “Welcome To My Nightmare”, “Only Women Bleed” and more, are featured in his live show, along with a mix of newer songs and fan-favourite album cuts. Alice’s touring band features the three guitar attack of Nita Strauss, Tommy Henriksen and Ryan Roxie, backed by longtime bassist Chuck Garric and drummer Glen Sobel.

With his influence on popular music long since acknowledged, his place in the Rock and Roll Hall of Fame secure, and with multiple gold and platinum albums, sold-out tours plus countless honours and career achievement awards, there is little that Alice Cooper hasn’t accomplished in his remarkable career.  He has spent almost 50 years touring the world, releasing 26 Studio Albums, has sold more than 50 million albums in the US alone, and is an entrenched, multigenerational pop culture legend.

Ace Frehley is a founding member of KISS, a musical maverick and iconoclast adored by millions of fans around the world.  Ace played on the classic KISS albums from 1983 to 1992 before reuniting with the band from 1996 to 2001.  Ace was responsible for many of the band’s biggest hits including “Talk To Me”, “New York Groove”, “2,000 Man”,“Rocket Ride”, “Shock Me” and more.  Like Alice, Ace is also a Rock and Roll Hall Of Fame inductee, and has influenced hundreds of bands and inspired guitar players of the ilk of Tom Morello and Dave Grohl.

Ace says, “I have been friends with Alice since the 70s, but I’ve never had the pleasure of touring with him!  Our tour of Australia in October this year will be a major Rock & Roll event down under and leave all our fans with big smiles and wanting more!!!  I can’t wait to hit the road!”

“My life has been a roller coaster ride, but somehow I’ve always been able to land on my feet and still play the guitar.  I can’t even read notes. But I can teach someone how to make a guitar smoke” says Frehley.