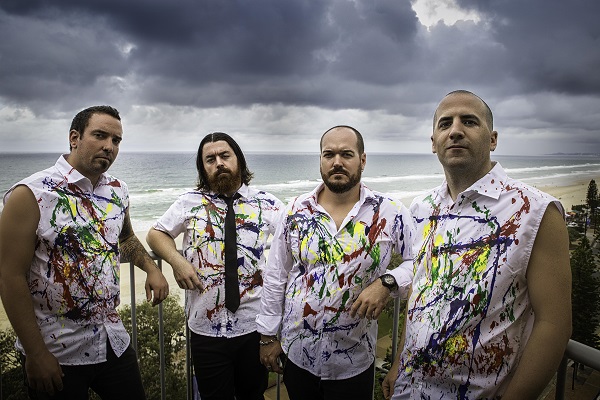 “We all came from a metal background. We’re all big fans of bands like Pantera and Mudvayne but have had our days in metal bands. Personally I wanted to step outside of my comfort zone of screaming and try to write something that would still appeal to fans of that genre whilst gaining the attention of more people into rock and alternative.”

Gold Cost based Alternative band The Silencio have just announced the release of their debut album ‘ANATHEMA’. ‘ANATHEMA’ is a truly unique Acoustic Rock record that provides a breath of fresh air to the scene. The Silencio formed in 2014 as an evolution of a solo project that singer songwriter Jan Nicholas Blom started in his early teens. The guys have since built a strong following across Australia and have developed a reputation for a killer live show. The band debuted with double EP ‘Upside Down’, which received stellar feedback from fans and press alike. The Silencio recently released their single and film clip ‘Been There All Along’, which was the first offering from ‘ANATHEMA’.

We had The Silencio answer some questions for us about the band and now join our Best Things You’ve Never Heard.

Let’s start with the basics; for those that aren’t aware of you, can you please give us the abridged version of The Silencio story, and how you would best describe the music of the band?
The Silencio started as a solo project and quickly evolved into a band based on the rhythmic song structures. Over the past few years we tweaked the sound to conjure up something new in the form of dark moody rock delivered through acoustic guitars at the front.

Jan Nicholas Blom (Vocals/Guitars) – has been to America.

You’re about to release your debut album  ‘ANATHEMA’, so instead of giving us a standard review, let’s say if you had to give us your best door to door sales pitch to try and convince someone to listen to it before they slam the door in your face, what do you say to them?
Free Beer! Now that we have your attention, you should check it out for something different. We’ve tried our best to incorporate our roots whilst straying from the path of conventional.

In terms of your song writing, what do you consider to be the most important ingredients that make up one of your songs?
Hooks in the form of riffs and vocals backed up by a thumping (up tempo for the most part) rhythm section. Having every band member contribute to vocals live creates room for more harmonies, which we find important.

Lyrically and musically, currently who or what inspires/influences your music the most?
We’re big on the 90’s grunge scene mostly. But we still look up to bands like the deftones, silverchair and baroness.

On the other side of that, what bands did you grow up listening to and how did they help create the style of music that can now be heard throughout your music?
We all came from a metal background. We’re all big fans of bands like Pantera and Mudvayne but have had our days in metal bands. Personally I wanted to step outside of my comfort zone of screaming and try to write something that would still appeal to fans of that genre whilst gaining the attention of more people into rock and alternative.

In terms of touring, here’s your chance to plug any upcoming shows, and also for those that haven’t seen you, how would you describe a typical live show from The Silencio?
We’ll be announcing our tour very shortly through our representation at Dirthouse Agency. For anyone new to seeing us, expect to see the sore thumb on the bill in that we’re different but in a good way. We still have the energy from our metal days!

For a bit of fun, say you get the chance to open for any artist or band in the world, who would they be and why?
If they were to ever reform we’d love to rock out with Days of the New. They’re the only band that has really tried to have a heavy feel on acoustic guitars like us.

If you could cover one song in your live set that no one would ever expect, what would it be and why?
I’ve always played a solo cover of Great Big White World by Marilyn Manson in the privacy of my own home. I’d love to convince the band to play that. I always loved how different it was from his previous work and inspired me to be adventurous with my writing.

Lastly, with 2017 well under way, here’s a chance to gaze into your crystal ball and see the future.  So, by the end of 2017, The Silencio will:

Watch their video for ‘Been There All Along’ HERE