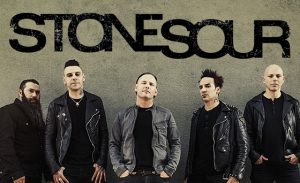 Tickets to STONE SOUR’s first headline Brisbane show have sold out. The Iowa hard rock outfit has confirmed the addition of a second and final Brisbane show at Eatons Hill Hotel on Tuesday, August 29.

Tickets for the new Brisbane show will go on sale at 10am this Friday, June 30.

My Live Nation members can be among the first to secure tickets during the pre-sale beginning at 10am tomorrow, June 28.

Stone Sour is touring in celebration of their forthcoming, highly anticipated fifth album, Hydrograd. Fronted by the charismatic Corey Taylor (Slipknot), the band has sold more than four million albums worldwide over the course of five full-length releases. Australian audiences last witnessed the raw power of a Stone Sour live show in 2013 when the band played Soundwave Festival and sideshows with Linkin Park.

Hydrograd features the lead track “Song #3” which reached #1 on the US Rock Radio Charts. “Song 3” is joined by an official music video directed by Ryan Valedez.  The video, which released May 23rd, is streaming now on Stone Sour’s official YouTube channel. The album will be released worldwide on June 30 (through Roadrunner).