Jack Barakat of All Time Low 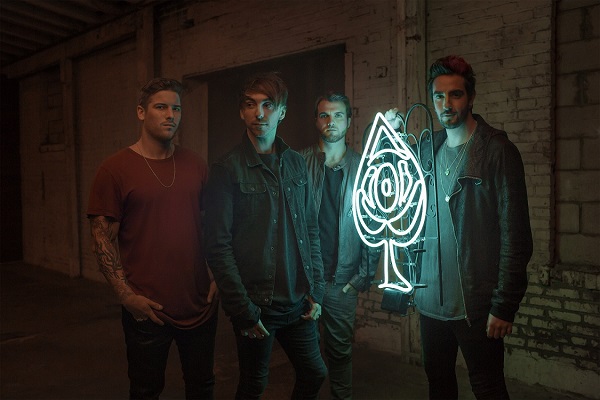 “I think that it was always in the back of our minds that we wanted something different and new and fresh, I don’t think we really knew what that meant, I don’t think we knew that it would be a darker moodier album per se, but yeah from the beginning we knew we didn’t want to do a straight through pop punk album, we haven’t really done one of those in a while.”

From Release:  Last Young Renegade follows All Time Low’s 2015 US chart-topping studio album Future Hearts and sees the band moving forward and exploring new sonic territory. Written during stays in the mountains of Big Bear Valley and the desert of Palm Springs, California, Last Young Renegade is a journey of critical self-reflection and catharsis unlike any previous body of work from All Time Low.  Expansive and nostalgic, the album finds the band sublimely crafting a sound that pushes the envelope with songs like Last Young Renegade, Life Of The Party, Good Times, and Ground Control (feat. Tegan and Sara).

While on tour in Australia, Jack gave us a call to talk about the band’s new album ‘Last Young Renegade’, touring, evolution, new labels, and much more…

Exciting times, you’ve got a new album coming, what are the feelings like around release time?
A lot of nervousness, a lot of anxiousness, a lot of anxiety but mostly excitement. It’s the kind of thing where dude, we started recording this record over a year ago and some of these songs are written two years ago and it’s just the eagerness to get it out and finally get to play it live for people.

How would you best describe this album?
I’d say it’s a moody album, it’s a darker album, it’s very moody, it’s very vibey. It’s kind of the perfect album to turn on when you’re driving at night and it’s kind of that vibe it’s like a lot of driving through the city at night vibes. It’s unlike anything we’ve ever done before and we’re really proud of it, I think it’s very cool different direction for our band and we’re excited to hear what people think.

Did you actually set out to do something different on this album or did it just evolve onto what it’s become?
I think that it was always in the back of our minds that we wanted something different and new and fresh, I don’t think we really knew what that meant, I don’t think we knew that it would be a darker moodier album per se, but yeah from the beginning we knew we didn’t want to do a straight through pop punk album, we haven’t really done one of those in a while. Even like ‘Future Hearts’ wasn’t really a pop punk album, I’d say it was a pop rock album if anything, maybe just a pop album *laughs* but yes I do think that we came in knowing we wanted to be different sounding, we wanted to be more vibey but we definitely didn’t know it was going to be a darker themed album, no.

Of course ‘Last Young Renegade’ is the title of the new album, what does it represent to you personally?
I think personally it’s a story about someone who goes through hell and back and makes it out at the end of the tunnel and it’s kind of about the hardships in life and that life isn’t all about gumdrops and rainbows *laughs* but I do think that we did it in a way so it’s not like a sad and depressing album, there’s uplifting songs and high energy songs but I do think that they’re very meaningful songs and very thought provoking at the same time which is pretty cool. Yeah it definitely touches on darker things in life and things we’ve never sang about before like ‘Dirty Laundry’ things that everyone has been through and can connect with which I think is great.

So seven albums in now does it get easier with each release or is it the opposite where you feel like you’re continually needed to do something different?
I think, good question, I think that it never really gets easier to release an album, you’re putting yourself out there and you’re risking criticism and you’re really throwing yourself to the wolves potentially *laughs* so it’s always difficult to release new music but it’s also fun and exciting and definitely a journey because you hear this album for a year and you really have no idea where it’s going to take you, you have no idea what it’s going to do to your band and it’s just that feeling of the unknown is kind of what keeps you going and keeps it kind of fresh and not stale.

You’ve also just joined the Fueled By Ramen family, what is it about that label that All Time Low wanted to be a part of?
Oh man, Fueled By is crazy, it’s the first label we wanted to sign to and it just never worked out for us in high school and it just never really made sense after high school when we had already signed to another label and we just always looked up to obviously their bands and the band’s music that they had on there but also what the bands were doing and the kind of family they created and it was always something we wanted to be a part of but it was just never the right time. So when we met with a couple of labels after ‘Future Hearts’ was all finished, we met with a couple of labels and I think Fueled By just got it, it made the most sense, they really kind of shared the same vision for what we wanted to do and how we wanted to grow and we didn’t even really talk about it, well we talked about it but it wasn’t really a hard decision to make.

You’re currently in Australia, how has the tour been going so far?
Oh so great man, these are the shows we’ve always dreamed of playing in Australia, we’d come over for Soundwave and see the big sidewave shows and all these bands headlining these little arenas over here, because we’ve been playing these kinds of shows in the UK and the US for years and Australia is one of those places where we always wanted that same success but because of how far away Australia is and how less frequent we get to come here it was more difficult and seemed kind of out of reach at times. So being able to come back here and play like for 5,000 people in Melbourne and Sydney is insane, dude, literally a dream come true.

Well unfortunately I missed the Sydney show because it clashed with another that night so can you maybe come back soon please?
Oh yeah for sure man, I don’t think it’ll take as long as last time. We had some trouble trying to get over here sooner because we couldn’t find a promoter after the whole Soundwave thing we were trying to find like someone new to bring us over here and once we did it was nice and since the tour’s been so successful and everything’s worked out so well on both sides now we have an avenue to come back here more often.

I have of course seen you before and there’s just always a sense of fun and just a damn good time when you’re on stage, what is it that you just enjoy about being part of this band?
To be honest man, I think the best part about our show is that every night is different, every night is literally a completely different show and I think the reason for that is that we’re so comfortable with who we are on stage and being ourselves and it kind of gives us this lane to kind of come up with randomness on stage, the random things that happen and our interactions with the crowd changes every day and people always ask us “are your shows scripted?” I’m like, are you kidding me? I literally can’t even remember some of our songs you really think I can remember jokes and lines? *laughs* Yeah we couldn’t script anything, I can’t even remember where I was yesterday *laughs* but no I think the things about our shows is that they’re so unique and anything can happen and every night’s a different journey and that’s what I love about it.

So obviously things change over time, but what would you say is the one thing that’s stayed the same over your time as a band making music?
I think one thing that’s stayed the same is everyone’s role in the band, I think it’s one of the reasons why we’ve been able to stay together for fourteen years is there’s no egos in the band, there’s no fighting over money or who does what or who gets what, everyone knows their role and their job and everyone’s comfortable with their place in the band and I think it makes touring a lot easier and makes everything a lot easier.

So what are the plans for the rest of 2017?
I guess we release the album and US tour, honestly man we’re a pretty grind heavy band, I mean the album’s not even out yet and we’ve already done Australia and Japan and UK tour, so we’re pretty tour heavy this year and I don’t think that’s going to stop for a while.

Let’s look ahead to the future, finish this sentence for me, by the end of 2017 All Time Low wants to…
Take over the world *laughs*. We want world domination.