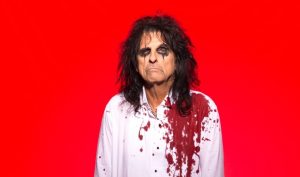 As anticipation builds towards the massive national tour this October, fans who missed out on securing tickets to the Melbourne and Brisbane legs of the ultimate rock show, ‘Spend The Night With Alice Cooper’, will be delighted to hear that these concerts are moving to larger capacity venues, with extra tickets now available!

The Melbourne concert will now take place at Melbourne’s Rod Laver Arena on Friday 20 October, whilst the Brisbane event on Wednesday 25 Octoberhas moved to Brisbane Entertainment Centre. Existing ticket holders will be assigned matching seating in the new venues, and will be contacted by ticketing agents with seat relocation details.

Tickets for the new venues in Melbourne and Brisbane will be available from midday on Wednesday, June 14 at www.ticketek.com.au

Alice will be joined on tour by the original KISS “Spaceman” Ace Frehley, as Very Special Guest. The pairing of Alice and Ace brings together these highly respected icons of rock and roll.

Ace Frehley fans who have already purchased a ticket to the show are in for a special treat, as he unveils an “Upgrade” option on his website.  The opportunity is there to purchase a Meet and Greet package via an existing ticket, as well as a further option to have a guitar signed by the man himself!  Head to http://www.acefrehley.com/tour_dates/ to secure your ultimate rock n roll experience.

The ‘Spend The Night With Alice Cooper’ tour commences in Perth on October 17 and concludes in Brisbane on October 25, showcasing an immense body of work across the catalogues of both artists.

Alice Cooper pioneered a grandly theatrical brand of hard rock that was designed to shock.  Drawing equally from horror movies, vaudeville, and garage rock, the group created a stage show that featured electric chairs, guillotines, fake blood and boa constrictors. He continues to tour regularly, performing shows worldwide with the dark and horror-themed theatrics that he’s best known for.

Alice’s catalogue of hits and anthems, including “I’m Eighteen”, “No More Mr Nice Guy”, “School’s Out”, “Elected”, “Poison”, and others, are featured in his live show, along with a mix of newer songs and fan-favourite album cuts. Alice’s touring band features the three guitar attack of Nita Strauss, Tommy Henriksen and Ryan Roxie, backed by longtime bassist Chuck Garric and drummer Glen Sobel.

In Australia Alice Cooper has topped the charts with songs like “Department of Youth”, “You and Me”, “Poison”, “School’s Out”, “Clones”, “How You Gonna See Me Now”, “Welcome To My Nightmare”, “Only Women Bleed” – a universally treasured song celebrating women’s rights and anti-domestic violence covered by both John Farnham and Tina Arena – “Billion Dollar Babies”, “No More Mr Nice Guy” and so many more.  The album “Welcome To My Nightmare” spent 101 weeks in the Australian charts!

“Nights With Alice Cooper”, Alice’s nightly radio show, is available in nearly 100 cities in Australia, the US, Canada and the UK. The five hour long show features his favourite classic rock songs along with his insider anecdotes about many of the artists.

With his influence on popular music long since acknowledged, his place in the Rock and Roll Hall of Fame secure, and with multiple gold and platinum albums, sold-out tours plus countless honours and career achievement awards, there is little that Alice Cooper hasn’t accomplished in his remarkable career.  He has spent almost 50 years touring the world, releasing 26 Studio Albums, has sold more than 50 million albums in the US alone, and is an entrenched, multigenerational pop culture legend.

Ace Frehley is a founding member of KISS, a musical maverick and iconoclast adored by millions of fans around the world.  Ace played on the classic KISS albums from 1983 to 1992 before reuniting with the band from 1996 to 2001.  Ace was responsible for many of the band’s biggest hits including “Talk To Me”, “New York Groove”, “2,000 Man”, “Rocket Ride”, “Shock Me” and more.  Like Alice, Ace is also a Rock and Roll Hall Of Fame inductee, and has influenced hundreds of bands and inspired guitar players of the ilk of Tom Morello and Dave Grohl.

Frehley and KISS took the music and make-up concept to a new high, debuting in 1973 – Alice Cooper was present at their first showcase, stating to the media “what these guys need is a gimmick!”. Ace’s most recent album, “Origins Vol 1” saw Ace collaborate with everyone from Slash to former band mate Paul Stanley – the latter reuniting on record with Ace for the first time since 1998.  Ace’s impact on popular music is immeasurable, and he continues to be the best selling member of the original KISS line-up.

Ace Frehley will perform a 60 minute set of hits from his career in and out of KISS – and of course, he’ll be bringing the smoking guitar!  Fans should be quick to upgrade their existing ticket to a VIP package as availability is strictly limited – visit http://www.acefrehley.com/tour_dates/ for more information.

TICKETING INFORMATION:  Tickets for the new venues in Melbourne (Rod Laver Arena) and Brisbane (Brisbane Entertainment Centre) will be available from midday on Wednesday, June 14 at www.ticketek.com.au