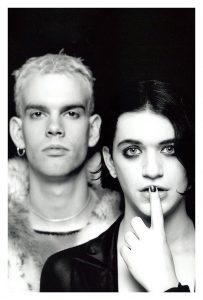 One of the world’s most widely recognised alternative rock bands Placebo, have today announced their first full national headline tour in 11 years, set to take Australia by storm in September 2017. The 20 Years of Placebo Australian Tour will celebrate the bands 20th Anniversary since the release of their platinum selling debut album Placebo.
With two decades of punky raw emotion, seven full-length albums and over 14 million records sold worldwide, Placebo will be playing a set list spanning their back catalogue of greatest hits, of which some songs have not been heard live for more than a decade.
Having not played on Australian soil since Soundwave 2014 and subsequent sideshows (Sydney and Melbourne), the addition of Australian tour dates to the 20 Years of Placebo World Tour has been highly anticipated by Placebo fans around the country. With their world tour already receiving rave reviews globally with Louder Than War saying “intense, relevant, pure alternative rock like no one else” and Buzz Magazine touting the tour as “nothing short of Spine Tingling”, Placebo will be giving their audiences a spine-chilling nostalgic tsunami of sound as they celebrate a 20 year journey of monumental achievements.
“We’re happy to be coming back to Australia this September to deliver fans something extra special,” says Brian Molko. “Let’s just say there will be songs in the set that I’ve sworn never to play again. I think it’s time that we purposefully acknowledged what a lot of Placebo fans really want to hear. They’ve been very patient with us since we rarely play our most commercially successful material. A 20 year anniversary tour seems like the right time to do so. That’s our intention. This tour is very much for the fans and a chance for us to revisit a lot of our early material. So, if you want to see us play songs like ‘Pure Morning’ and ‘Nancy Boy’ which we haven’t played in almost ten years and may not play again, then you’d better come along to these shows! We’ll have some surprises in there too.”
Placebo remain one of the world’s biggest alternative rock bands of the last 20 years having achieved gold and platinum albums in over 30 countries.
Known for their incendiary live shows Placebo have sold out arena tours and headlined festivals in over 70 countries on 6 continents during their career, playing to over 1 million people on their last album tour alone.
If you’re a Placebo fan, you won’t want to miss the highly anticipated 20 Years of Placebo Australian Tour featuring 20 years of some of the greatest alternative hits known to man.
20 YEARS OF PLACEBO AUSTRALIAN TOUR DATES:

TICKETING INFORMATION:
An exciting pre-sale is available exclusively for Telstra customers from 12pm noon Friday 26 May until 8pm Sunday 28 May 2017 (local time). Head to www.telstra.com/placebo for more details on how to purchase.

Tickets will be available to the general public at www.ticketek.com.au from 12pm noon Monday 29 May 2017 (local time).

‘A PLACE FOR US TO DREAM’ ALBUM INFORMATION:
Placebo celebrated an incredible 20 years with the release of a must have retrospective hits album ‘A Place For Us To Dream’, last October through Universal Music. ‘A Place For Us To Dream’ includes singles from the early; ‘Bruise Pristine’, ‘Come Home’, ‘Teenage Angst’, to the career defining ‘Nancy Boy’, ‘Every You Every Me’, ‘Pure Morning’, ‘The Bitter End’ right up to, ‘Meds’, ‘For What It’s Worth’ & ‘Too Many Friends’.
ABOUT TEG LIVE:
TEG Live is wholly owned by TEG Pty Limited, Australia’s leading integrated live entertainment solutions company with extensive capabilities in ticketing, digital data and the promotion of live sport and entertainment events. TEG Live has been designed to enhance the quality of the Australian live entertainment and events industry through the development and commercialisation of live content across all entertainment genres. TEG Live’s core service includes touring, exhibitions, brand partnerships, sponsorship and corporate hospitality, event management and consulting.
Share this post on: Share on FacebookShare on Twitter
Tags Placebo TEG Live