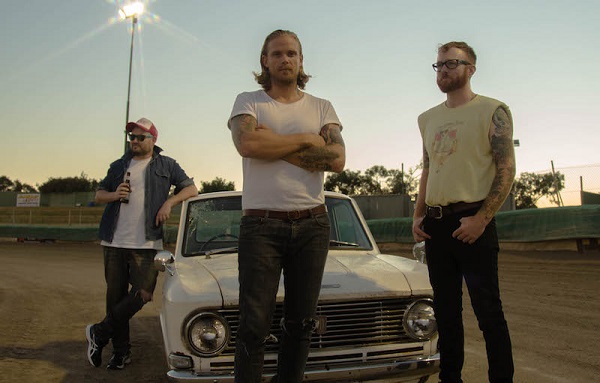 “You’ve got to just put your own thoughts down in the least corny/lame way possible, decide you hate them, screw them up and throw them in the bin, hit yourself in the face a few times, and start again. At its best, writing lyrics is like doing a massive, satisfying burp. At its worst it’s more like cutting out a cancerous tumour with a spoon and some rubbing alcohol.”

From release: For over seven years, Grenadiers punk/rock straddling fury has seen them rise above the tangle of middle-of-the-road domestic rock. The trio emerged victorious to claim triple j feature album status for their acclaimed 2nd LP ‘Summer’ last year, touring nationally with punk legends Millencolin and Shihad and decamping to the UK to dominate at The Great Escape. Happy Mag listed Jesse in their ’20 Aussie Singers You Need in Your Life’ piece. Rad.

We had Jesse answer some questions for us about Grenadiers and you can see for yourself as they become our newest ‘Best Thing You’ve Never Heard’.

Thanks for your time, guys! Let’s start with the basics; for those that aren’t aware of you, can you please give us the abridged version of the Grenadiers story, and how you would best describe the music of Grenadiers?
The Grenadiers story is fairly unexceptional. Man likes rock music. Man finds other men who like rock music. Said men play rock music. Sweaty dudes spending summers in smelly jam rooms coming up with riffs- fun, but not a very exciting tale! As for describing the music, I reckon that’s the job of journalists. We just play it!

Can you now please introduce each band member including yourself, and give us a rock and roll fact or myth about each of you?
One of these is true. See if you can pick which one.
Phil Meakin – Bass: Possesses the power to turn Coke into Pepsi.
Jimmy Balderston – Drums: Is a long-lost descendent of a line of exiled Mongolian kings.
Jesse Coulter – Guitar/vocals: Has red hair.

You have just released your newest single ‘Suburban Life’ , so instead of giving us a standard review, let’s say if you had to give us your best door to door sales pitch to try and convince someone to listen to it before they slam the door in your face, what do you say to them?
Excuse me sir, do you have a moment to discuss speedways, bongs and loud music?

In terms of your song writing, what do you consider to be the most important ingredients that make up one of your songs?
Some measure of sobriety is probably a good start. Once you hit beer number 6 or so, things start to get sloppy. Other than that, some patience, a good headspace, and a couple of riffs is usually all you need. Lyrics are the hard part. I keep a list of overheard phrases, quotes, ideas, etc which I refer to when it’s time to get cracking. Most lyrics start that way in one form or another.

Lyrically and musically, currently who or what inspires/influences your music the most?
Musically, the perennial favourites are The Saints, Radio Birdman, The Bronx, Hot Snakes, Midnight Oil and a billion others. Recently I’ve been really getting into Meat Wave, The Nerves, King Gizzard And The Lizard Wizard, and Mission Of Burma. We all like different stuff though- Phil’s a big fan of harder stuff like Every Time I Die as well as some modern pop music. Jimmy Loves Roland S Howard, The Budos Band, High On Fire, lots of different stuff. My favourite lyricists are probably Gareth from The Drones and Blake from The Peep Tempel. I don’t try and write like them though, to try and emulate someone else s writing is suicide. You’ve got to just put your own thoughts down in the least corny/lame way possible, decide you hate them, screw them up and throw them in the bin, hit yourself in the face a few times, and start again. At its best, writing lyrics is like doing a massive, satisfying burp. At its worst it’s more like cutting out a cancerous tumour with a spoon and some rubbing alcohol.

On the other side of that, what bands did you grow up listening to and how did they help create the style of music that can now be heard throughout your music?
All three of us come from heavy music backgrounds, so while I could pretend to be the cool guy and say I grew up listening to all these cool, credible underground bands, that s rubbish. I was cranking as much Pantera and Cannibal Corpse as I was Nuggets compilations or cool indie bands. Everything you grow up listening to has an impact.

In making music for over seven year now what’s the biggest thing you’d say you’ve learned about being in this band?
Nothing is easy.

Two albums in when can we expect a new album from Grenadiers?
This year. Recording wise, it’s done. We just need to figure out all the other stuff.

In terms of touring, here’s your chance to plug any upcoming shows, and also for those that haven’t seen you, how would you describe a typical Grenadiers live show?
At a typical Grenadiers show, we give at least 60, sometimes 70 percent on stage. People often say about us: “holy shit, that was so… adequate!”.  We’ve got The Worker s Club in Melbourne on May 19 and the Cranker (as part of A Day Of Clarity) on May 20.

For a bit of fun, say you get the chance to open for any artist or band in the world, who  would they be and why?
Queens of The Stone Age. Because they’re one of me and Phil s favourite bands ever and have been since we were kids. They’re badass, always have been badass and still are badass.

If you could cover one song in your live set that no one would ever expect, what would it be and why?
There’s no point in saying which song we would cover if we could, cos we can. We’ve dropped a few things live in the past Radio Birdman, Black Flag, Midnight Oil, Motorhead, Misfits, Creedence, etc etc. But something being unexpected is probably a good thing. We used to cover a Sia song many years ago.

Lastly, with 2017 well under way, here’s a chance to gaze into your crystal ball and see the future.  So, by the end of 2017, Grenadiers want to:
1. Release an album
2. Tour heaps
3. Drink our body weights in Jameson