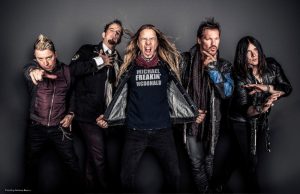 FOZZY have unleashed the first single off the band’s forthcoming seventh studio record. The electrifying new music video for the track, titled Judas, was premiered with Loudwire. In addition to the video premiere, Judas will serve as the official theme song for the WWE event “NXT Takeover: Chicago” on May 20th.

Fozzy frontman and WWE Legend Chris Jericho offers his take on the Judas music video, stating: “For such a dark and sexy song like ‘Judas’, we wanted a dark and sexy video to match… and we got that and more! In one take we filmed a unique, visually stunning masterpiece that combines an incredible song, psycho clowns, hot chicks, a man on fire and a great rock n roll band, all in one tasty video morsel. What more could you want… a giant rabbit holding balloons? Oh yeah, we’ve got that too!”