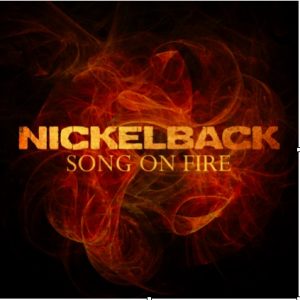 Diamond-certified, global award winning rock band, Nickelback, today premiere their new track, “Song On Fire”, taken from their ninth studio album “Feed The Machine” which will be released on June 16th and will be a radio single in all international territories.

The track will then later released as a radio single in North America this summer. Chad Kroeger has said of the new track

“As we were working on this song, a very personal one for me, we all instantly connected to it on different levels through our own personal experiences. Everyone has a need to love or be loved and we’ve all been hurt or felt loss.  It’s about your heart yearning for something that your rational mind knows is impossible to hold on to. There is a universally, haunting finality to losing love and we found ‘our protagonist’ (in this song) trying to reclaim it; but not knowing where to begin or that it might ultimately be in vain.”

The band recently premiered the blistering and defiant title track from the album, “Feed The Machine” and the video can be viewed here.  “Feed The Machine” is currently a Top 10 hit at Rock Radio in Canada and the U.S. with more than 100 stations reporting adds since its release and is currently sitting at #4 on the NZ rock radio airplay chart.

Additionally the band will venture out on their colossal 45+ city North American Feed The Machine Tour (produced by Live Nation) and kicking off on June 23 with further dates to be added along the way.

In March, Nickelback joined the exclusive DIAMOND-certified club after the RIAA certified the group’s fifth studio album, All the Right Reasons, DIAMOND for surpassing 10 million units.

Since forming in Alberta, Canada in 1995, globally celebrated, diamond-certified rock band Nickelback have cemented themselves as one of the most commercially viable and important acts of the past two decades. Nickelback’s success includes worldwide sales of more than 50+ million units, solidifying their status as the “eleventh best-selling music act” and second best-selling foreign act in the U.S. of the 21st century—behind only The Beatles. Their inescapable and irresistible smash “How You Remind Me” was named Billboard‘s ‘Top Rock Song of the Decade’ and was No. 4 on the Top 10 songs of the 2000s list.  Amongst all of these accolades, they’ve also been named Billboard‘s “Top Rock Group of the Decade.”  Along the way, they have received a staggering nine Grammy Award nominations, three American Music Awards, a World Music Award, a People’s Choice Award, twelve JUNO Awards, seven MuchMusic Video Awards, and have been inducted into Canada’s Walk of Fame (2007).

Fans who pre-order the album will receive  two instant grat tracks: Feed The Machine and Song On Fire!