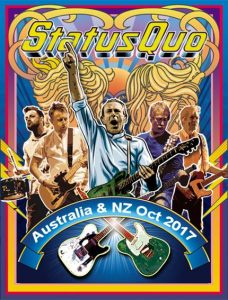 Revered as one of the best classic rocks bands of all time, Status Quo have announced their final full-on electric shows for Australia and New Zealand in 2017. It’s been four years since they’ve toured down under, but in a massive coup for New Zealand audiences, this will be the band’s first run in more than 40 years. The highly anticipated The Last Night of the Electrics Tour was announced in the UK last year and has already seen the band play a swag of sold-out performances.

Status Quo are well-known for their legendary thunderous live shows. Jam packed with hits, both old and new, they have an enviable back catalogue that makes for an unforgettable evening of music. From songs such as Rockin’ All Over the World, Whatever You Want and Down Down to Caroline and Roll Over Lay Down, an evening in the company of Status Quo promises to be a full-throttle no-nonsense electric set of great rock music!

With Francis Rossi (O.B.E), John ‘Rhino’ Edwards and Richie Malone on guitars, Andrew Bown on keys and Leon Cave on drums, The Last Night of the Electrics tour promises to rock audiences socks off. The tour will also be an opportunity for Quo to tip their hats to the late Rick Parfitt (O.B.E) who passed away over Christmas. Richie Malone stepped into the big musical shoes Rick left when he retired from the band in mid-2016 and will continue to be an integral part of keeping the Quo live experience tight.

Even though Quo are unplugging the electrics after this tour, this doesn’t mean it is the end of them performing forever. But, if you want to experience Status Quo in full-on classic rock mode, then this will be your last chance. “We’ve talked about it for some time and have decided that it’s time for us to hang up the electrics,” says Francis. “It’s getting harder and harder for us to play those shows. Its 30 years since we last said we were stopping, but this is a final decision. It doesn’t mean we won’t do other things, perhaps the odd special, but we’ve agreed that the moment has come. There’s more to come from us in the years ahead, but we won’t tour the electric set ever again.”

Rockin’ their way through their full-throttle tour around the globe, Australia and New Zealand were always going to be key places on the list. Francis says the whole band is excited about getting to perform to their Aussie and Kiwi fans. “Quo have always had a special connection with our Aussie fans over the years and our previous Australian tours have given us some great memories on and off the stage,” he says. “When the opportunity came up to play in New Zealand – after more than four decades – we jumped at the chance.”

Status Quo are one of the world’s biggest rock bands. They’ve sold in excess of 118 million units world-wide and in 2013 they released their 100th single. Their first smash hit, Pictures of Matchstick Men, peaked at #7 on the charts in 1968 and they haven’t stopped releasing chart toppers since. They’ve got 43 British Album Chart hit albums under their belt (27 studio albums, 11 compilations and five live albums) and have been awarded the coveted Outstanding Contribution To The British Music Industry accolade at the BRITS Awards. Throughout their career, it is estimated Quo have performed more than 6000 shows to a total audience of more than 25 million people.

Don’t miss Status Quo’s The Last Night of the Electrics tour – proudly presented by Artist Network and Regional Touring – before the band unplug their telecasters and turn off their amps for the last time.

Tickets go on sale to the general public on Monday 6th March 2017.