DEF FX: Announce Australian Tour for July: with guests My Life With The Thrill Kill Kult 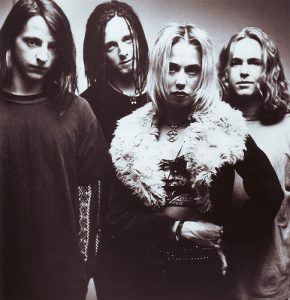 DEF FX, Australia’s own electronic surf rock band of the 90s is returning to Australia in 2017 for a national tour!
Fronted by the enigmatic Fiona Horne and joined by the original line-up, including founding guitarist Blake Gardiner – this is a show not to be missed!

“This 20 year reunion tour is a dream come true for the band and our Def Family of fans.  It will be the first time in 24 years that Marty and I have performed with Def’s founding guitarist, Blake Gardner.
And we’re super excited to be joined by our special guests, My Life with the Thrill Kill Kult – we’re all going to party like its 1996!  It’s going to be a healing, rocking time!”-  Fiona Horne.

DEF FX will be joined onstage by My Life with the Thrill Kill Kult (often shortened to Thrill Kill Kult or TKK ) on their first ever visit to Australia.
Hailing from Chicago’s renowned Wax Trax Records stable of bands, THRILL KILL KULT creators Groovie Mann (lead vocals) and Buzz McCoy (keys/production) have been conjuring up sonic tales of blasphemy, sexcapades and kitschy horror for over 25 years. Their sound is a concoction of experimental, disco, rock, new wave, lounge and glam, interlaced with their signature “sampled dialogue” –
a reflection of the duo’s musical influences, and insight into their taste in cinema. During the early 1990s, Thrill Kill Kult had several hits on the U.S. dance club and alternative charts.
They also contributed songs to several movie soundtracks and appeared in the 1994 film The Crow.
The band has continued to record and tour with a rotating lineup in addition to core members Mann and McCoy. 2017 will mark the band’s 30th anniversary.

The Heaven and Hell tour will mark a special reunion for DEF FX, bringing together the original songwriters and performers that were pivotal in creating that unique 90s DEF FX sound and image.
They will play all their hits and are releasing a new single especially for the tour.  Joined by friends and cult band TKK will make it one of the music events of the year.

Tickets on pre-sale from Wed, March 8 and general on sale from Fri, March 10 via
www.abstractentertainment.net
www.facebook.com/DEFFXOFFICIAL
mylifewiththethrillkillkult.com

ABOUT DEF FX
DEF FX are Australia’s number one surf electronic rock 90s band.  Their music has been described as a fusion of psychedelia, industrial, grunge, electronica, and heavy metal, and in their early days, even reggae and disco. They released a number of albums in the 90s including Water (1991), Light Speed Collison (1992), Baptism (1993) and the ARIA Gold album Majick (1996).  The band disbanded in 1997 after multiple chart successes and a reputation as the best live touring band in Australia.  They toured internationally with bands like Smashing Pumpkins and No Doubt.

Fiona Horne herself widely regarded as one of the pioneering women in Australian punk rock music.  Starting in bands in the 1980s Fiona went onto to create DEF FX in 1991 and was known as one of the most enigmatic women in Australian music of that time.  Fiona went on to write several bestselling books on Witchcraft, and established herself as a popular international television personality and radio show host.  Most recently, Fiona became an accredited commercial pilot and is passionate about working with organisations providing medical services, food and supplies to poor and underprivileged communities.  In February 2017, she coordinated relief efforts and piloted two humanitarian aid missions into Haiti in the wake of devastating Hurricane Matthew.

2017 will mark the 20th year anniversary since the band broke up.  It will also be the first time since 1993 that the original founding guitarist, BLAKE GARDNER will perform with the band.  Blake (with a story like original guitarist of Red Hot Chili Peppers, John Frusciante) is the original song writer of name-making hits like, SURFERS OF THE MIND.  His sonic style was a cornerstone of the band’s sound.  Whilst the band was touring the USA in 1993 with two songs in the Billboard charts, Blake had a breakdown and the band could not complete the tour.  A replacement guitarist was brought in who remained in the band whilst Gardner went on to perform in metal bands in Denmark and become a ground-breaking music producer there.