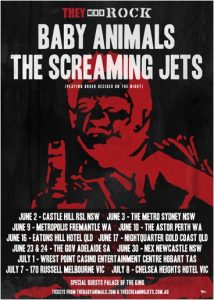 Baby Animals and Screaming Jets, two of Australia’s finest rock bands, will hit the road together this June and July in the rock event of the year!

Fronted by Suze DeMarchi and Dave Gleeson respectively, two of the country’s most dynamic performers, fans can look forward to a four on the floor night of rock from these incredible live acts  – complete with a massive set list. Songs such as ‘Better’, ‘One Word’, ‘Helping Hand’, ‘Painless’, ‘Shivers’, ‘Early Warning’, ‘October Grey’, ‘Rush You’, ‘Eve Of Destruction’, ‘Needle’, ‘Make It End’ – you won’t hear a finer collection of rock songs assembled together.  Playing order will be decided each night, keeping it interesting for fans.

The Jets …9 albums, 7 Top 40 radio hits, countless live shows and a Hot Metal magazine #1 album for 2016. After 27 plus years, The Screaming Jets are working harder than ever. The brainchild of a bunch of mates hailing from Newcastle Australia, the Jets have evolved into an elegantly debauched rock n roll machine that never disappoints.

Step into the world of The Screaming Jets and you’ll find a powerhouse live machine performing their hits to packed houses nation-wide.

Iconic front man, Dave Gleeson’s frantic and frenzied command of the stage leads a revitalised band of Paul Woseen on bass and main backing vocals, Scott Kingman (Divinyls and James Reyne) and Jimi “The Human” Hocking (blues and rock guy extraordinaire) on guitar and backed up by the thumping beats of Mickl Sayers on drums.

Dave Gleeson says….”We first shared a shared a stage with the Baby Animals about 25 years ago. We’ve all done a lot of miles since then. There’s always been a lot of mutual respect and musical admiration between the two bands. We’re all pumped to be part of what’s going to be a huge event in live music. We’re taking it national. See ya there!”

This time in 1992, Baby Animals were celebrating their first No.1 album as their debut self-titled release reached top spot on the ARIA Albums Chart.  Fast forward 25 years and the band are riding high on the back of full houses for their recent ‘One Word’ anniversary tour.  Suze DeMarchi’s reputation as a fierce and inspiring front woman remains undiminished, her rapport with songwriting partner and guitarist, the legendary Dave Leslie, as dynamic as ever.

Baby Animals emerged on the Australian music scene in 1991 and delivered four massive hits off their debut album.  They also picked up three ARIA Awards in 1992, for Album Of The Year, Breakthrough Artist Of The Year – Album and Breakthrough Artist of The Year – single for ‘Early Warning’.  Their self-titled album was also named in the 100 Best Australian albums. Their second album ‘Shaved And Dangerous” reached No. 2 and their 2013 album, ‘This Is Not The End’ reached top 20.

The band, featuring DeMarchi, Leslie, drummer Mick Skelton and bassist Dario Bortolin, is currently writing for a new album and as Suze DeMarchi states, “playing our asses off!”.

With special guests Palace Of The King