WEDNESDAY 13 – sign to Nuclear Blast! New album out in June!

WEDNESDAY 13 has signed a new deal with Nuclear Blast Entertainment and is set to release his eighth solo studio album, titled »Condolences«, on June 2nd.

The horror punk kingpin and former-MURDERDOLLS frontman is thrilled to be joining his new record label home, telling us, “We’re so excited to finally announce that we have signed with Nuclear Blast Entertainment!  It’s an honor for us to be on the roster among so many other great bands and friends. Thanks to Nuclear Blast for giving us the opportunity and our fans for your undying support.  We’re looking forward to many more years of this with all of you.”

WEDNESDAY 13 will embark on a tour of the UK later this month with his ‘Undead, Unplugged’ tour.  The intimate evening features an extended set of acoustic versions taken from his extensive catalog, plus a wealth of tales regaled from years on the road with early projects MANIAC SPIDER TRASH and the FRANKENSTEIN DRAG QUEENS FROM PLANET 13, through to the debauched heights of MURDERDOLLS and more recently, his lengthy current solo career.  Support on the tour comes from his outlaw country side-project, BOURBON CROW – featuring Wednesday’s longtime friend and singer/songwriter Rayen Belchere. 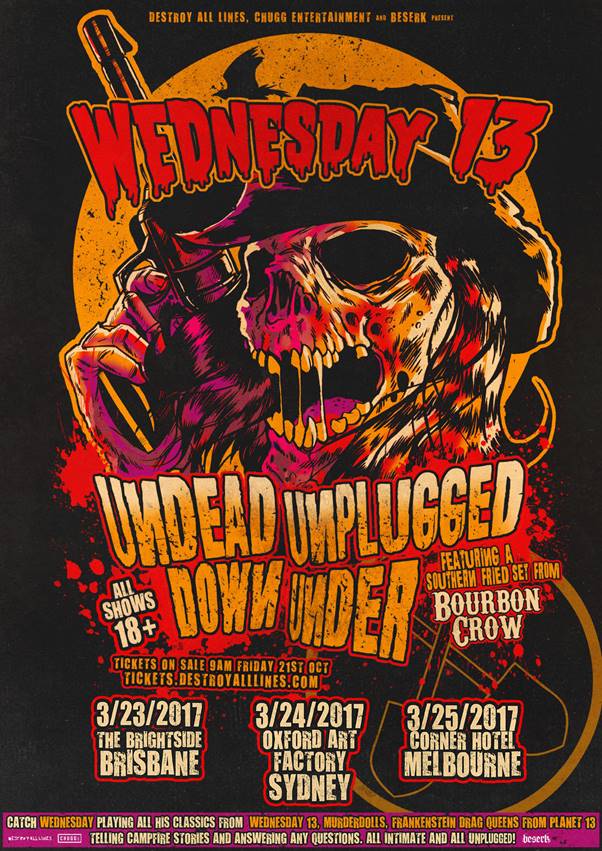