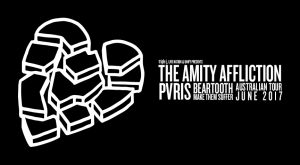 THE AMITY AFFLICTION have announced they will embark on a headlining national tour this June in support of their #1 ARIA album This Could Be Heartbreak.

The Amity Affliction recently finished up a successful 13-date regional tour, which saw some shows sell out in minutes of going on sale. The tour would go on to sell more than 15,000 tickets across Australia. Underplay shows surrounding This Could Be Heartbreak’s August 2016 release also sold out completely in just two hours, with second shows put on sale almost immediately due to popular demand.

Tickets for all shows go on sale at 11am (local time) this Friday, February 17.

Telstra Thanks is bringing an exciting 48-hour pre-sale just for Telstra customers from 10am Wednesday February 15 until 10am Friday February 17. For more information on how to purchase, visit: telstra.com/music.

The Amity Affliction’s fifth album, This Could Be Heartbreak was the band’s third consecutive release to debut in the #1 position on the ARIA chart, and TAA are only the fifth Australian band to achieve such a milestone in the history of the chart. The album has also been hailed their “personal-best album”, by UK heavy music bible Kerrang!

Formed by Lynn Gunn (guitar/vocals/keys), Alex Babinski (guitar/keys) and Brian MacDonald (bass/keys), PVRIS (pronounced Paris) have toured the US several times in the past few years including a national tour with Fall Out Boy following the release of their acclaimed debut, White Noise. PVRIS will be flying into Australia fresh from their US tour with Muse and 30 Seconds To Mars.

In the two short years since their debut album was cooked up in front man Caleb Shomo’s basement, BEARTOOTH have catapulted into heavy music’s stratosphere. “The Lines,” “Beaten in Lips,” “In Between” and “Body Bag” collected more than ten million views on YouTube, as Beartooth trekked around the globe with Slipknot, Bring Me The Horizon, Sleeping With Sirens, landing back in Australia this June to follow up on their 2016 tour with Pierce The Veil and Silverstein.

Hailing from the most remote capital city on the planet (Perth, WA!), sextet MAKE THEM SUFFER have been honing their razor sharp blend of frostbitten black metal, fiery hardcore and gothic misery since 2008. News of a new MTS album on the horizon for 2017 also has fans fired up, especially on the back of latest single “Ether”.

The Amity Affliction spent most of 2016 playing to seas of people on the European summer festival circuit and local fans will be eagerly anticipating the band’s cap-city shows, with the TAA at the top of their world-class performance game.

*ALL SHOWS ARE LICENSED/ALL AGES*

TICKETS ON SALE
11AM FRIDAY FEBRUARY 17