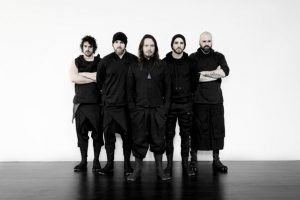 To understate it in the biggest way possible, 2016 was a big year for Twelve Foot Ninja. Tours across the US at some of the country’s biggest rock festivals and alongside some of the biggest rock and metal bands on earth, they dropped their second full-length record Outlier, (Top 5 Billboard Hard Rock Chart debut and top 10 overall ARIA Chart debut) that scored them an ARIA award nomination, they toured Australia with Disturbed and headlined their own sold-out shows as well AND dropped two of the most hilarious filmclips – ever – for their singles One Hand Killing and Sick, which earned them a combined 1.7 million views on Youtube.

Now, with their 2017 ‘SICK’ Single tour kicking off on Saturday just gone with a Sold-Out performance at the Corner Hotel in Melbourne with Ecca Vandal and Figures, they are today announcing their supports for the rest of the tour, which continues around Australia through February and March – tickets are already selling like the proverbial ninja hotcakes.

Victorian dates on the tour will catch ECCA VANDAL and OSAKA PUNCH, Queenslanders have scored OSAKA PUNCH and HUMALITY on all dates, Western Aussies will see SPARROW and NUCLEUST take the stage, Adelaide crew get locals COLIBRIUM and JAPAM, Canberrans have scored TROLDHAUGEN and NA MAZA, Wollongong and Sydney will see TROLDHAUGEN and HEMINA and Newcastle’s show rounds out the tour with local legends MAJORA.

To understand how Twelve Foot Ninja developed a fervent underground following and garnered international attention, you have to see them live. They have amassed an enviable following of fiercely loyal, yet musically open-minded fans thanks to their two EPs, debut album Silent Machine, and most recently released ARIA-nominated album Outlier.

“There’s a lot that’s familiar in the Mike Patton-esque vocals, the djent style, the crunchy chugs and snappy changes, but Outlier is such a rule-breaker that it’s still unpredictable and rewarding.? The five-piece have upped the ante on the complexity and diversity of their previous release.” – The Music – 4/5 Stars

“There’s no sign of performance anxiety on Outlier, as the band shower their sophomore with a steady stream of avant-garde gold. [Twelve Foot Ninja] schizophrenically scatter between styles, cultures and instruments, dropping djent riffs so chunky you could carve ’em.?” – Rolling Stone Australia – 4/5 Stars

“[Outlier] kicks the asses of a lot of recent alternative rock/metal releases and I’d certainly recommend it.” – Metal Injection

“The album has more riffs, music styles and time changes than most bands have in their career. I’m Now a fan.” – Decibel Geek

“…there’s nothing in the world to accurately compare [Twelve Foot Ninja’s OUTLIER] to. That sentence alone should translate as mission accomplished for the band and must purchase for heavy music fans worldwide.” – Music Feeds

“[Twelve Foot Ninja’s] mixture of tight, heavy metal conventions is shaken up by their superb knack for cleaner, dynamic musical sections that evokes a mixture of latin and jazz styles. Whichever the case, it’s all superbly executed.?” – Killyourstereo