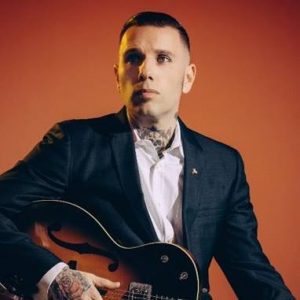 At a time when much of contemporary rock music has been reduced to meaningless theatre performed by false pretenders, TIGER ARMY is an antidote, bracing in its authenticity. Hear it, and hear the sound of artistic legitimacy reclaiming rock music!

Frontman and visionary Nick 13 has never written the same album twice.  The same can be said about TIGER ARMY’s fifth full-length, and return after a nine-year studio hiatus, V •••–.  The latest chapter picks up right where ‘Music From Regions Beyond’ left off. “Tiger Army’s return is subtle but triumphant and Nick 13 offers up every reason for the next generation to fall for his magnetic vocal croon and richly thumping psychobilly double bass.”- The Punk Site

Joining TIGER ARMY is none other than legends of Australia’s psychobilly scene, FIREBALLS. With 4 classic albums under their belt and a new album on the way early next year, they are set to unleash their nitrous fueled brand of chaos to audiences and to quote the band “If you miss this then you don’t have a pulse, Fire up, fuck ya!”

Just to round this incredible triple bill off is none other than PAT CAPOCCI! Since forming nearly 10 years ago, PAT CAPOCCI has emerged as one of Australia’s most respected practitioners of Rockabilly and Roots music. “Pat Capocci is nothing else than one of the best thing to happen to modern rockabilly in the recent years…he sounds as if he came right from the fifties whether he plays rockabilly, blues, hillbilly bop.”- The Rockabilly Chronicle

TIGER ARMY will be making their first trip to Australia in over 8 years and with FIREBALLS and PAT CAPOCCI they will be rockin’ their way along the East Coast in February 2017. Tickets are on sale NOW! 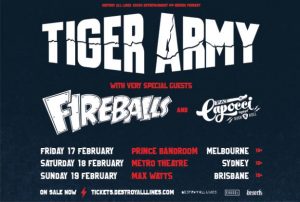