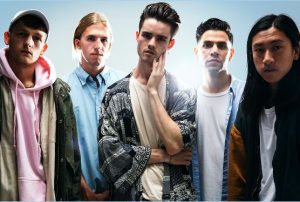 Melbourne Death Pop crew Storm The Sky have revealed the brand new video for “Wake Up Sleeping”, the third and final part of their music video trilogy, You Do This To Me, which includes “Lilac” and “Medicine”.

You Do This To Me video trilogy is an intense and striking snapshot into a life spiralling out of control, in which he seeks to fix his problems the very same way he created them in a city consumed by drug culture that eventually swallows him whole. The final part of the trilogy “Wake Up Sleeping” is a surreal take on crossing over to the other side, which was impressively filmed in one take. The video for “Wake Up Sleeping” is a collaboration between Storm The Sky and The Astor Theatre (one of the few remaining 1930s single screen theatres in the world), with the help of Noni Hazlehurst.

Storm The Sky have also announced the departure of their drummer Alex Trail. His last show with Storm The Sky will be this weekend at UNIFY 2017, and the band has released the following statement: “Hey everyone, It is with a sore heart that we have to let you all know that our long time drummer Trail (Alex) will be leaving the band due to personal and career endeavours in his life that he’s moving on to, and that we’re extremely excited and happy to get behind and support. Trail has been our brother for the last 10 years and so we will dearly miss having him around. We’re all still close mates and wish him all the best in the future.

“With that said, we will be continuing as a four piece and won’t be looking for a new drummer. Alex is an amazing friend and musician and we can’t imagine replacing him anytime soon. Instead we’ll be involving and jamming with musicians that we respect and hold as dear friends. We have a lot of exciting things in the works so stay tuned!

After UNIFY 2017, Storm The Sky will embark on their Sin Will Find You headline tour – a series of ALL AGES shows that will take in stops all around Australia in March. The tour will be their first headline run since the release of their sophomore album of the same name, which came out in August 2016 and has been turning heads all over the globe ever since. Spending much of 2016 traversing the highways across Australia, supporting US heavyweights Pierce The Veil and The Used, Storm The Sky wowed those in the audience with Heavy Mag saying, “their live set is something that has to be witnessed first hand”, with Killyourstereo agreeing Storm The Sky have transformed into an incredible live experience: “the former-metalcore band have spread their wings and flown into the beautiful skies with a pop/post-hardcore/ambient rock fusion”.

Their 2015 Permanence headliner saw them sell out every show in advance. Tickets for the Sin Will Find You Australian Tour are on sale now and expected to fly out of box offices in the same fashion.

Storm The Sky – Sin Will Find You Australian Tour