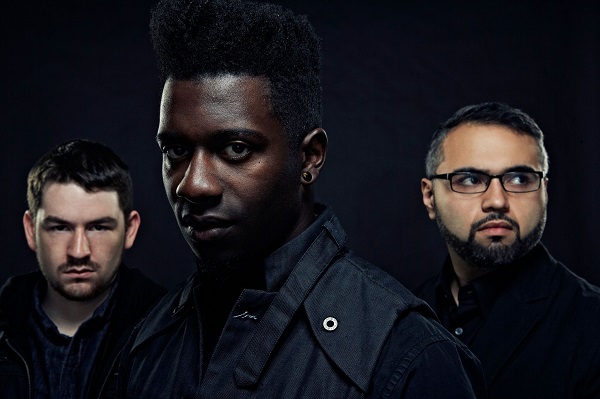 “I think there’s always a population of people who are fans of technical music or seeing someone excel at music, I think that bands that are able to do that and also write catchy music is slightly different from the Satriani’s and the Vai’s who are inherently guitar centric which is the focus, for us we’re still trying to compose songs that not just guitarists can listen to or not just drummers.”

From release: Instrumental heavy rockers, ANIMALS AS LEADERS, have announced their return to Australia next February and March for a national tour in celebration of their new album out now. Enthralling and captivating crowds with their innovative guitar-based metal sound, Animals As Leaders kick off their The Madness of Many national tour in Brisbane on February 25, followed by shows in Sydney on February 26, Melbourne on February 28, Adelaide on March 1 and finishing up in Perth on March 2.

In Canada having brunch, Javier gave us a call to talk about Animals As Leader’s return to Australia, their new album ‘The Madness of Many’, creating instrumental music, and much more…

Of course we’re here because you’re heading back to see us, for those that haven’t seen an Animals As Leaders show, how would you best describe the experience?
I think the best way to describe it to anybody, it’s a very complex and high energy musical experience that obviously parallels or explores multiple genres and instrumental methods if you will. We’re a modern day jazz trio.

Being here before, last time at Soundwave, what are some of your favourite memories of touring here?
Well the shows were amazing, I actually remember the food being good in Australia and when you’re travelling internationally can actually make you feel at home if you get good food.

I saw you guys play in Sydney at Soundwave and you guys completely blew me away…
Yeah considering that we’re instrumental and prog we generally stand out in a lot of festivals or support tours that we do, it’s kind of one of the things that this has been a blessing and a curse for the band just to be able to stand out in these situations and thankfully it’s all worked out in our favour more so than negatively.

You have just released your fourth album, how did making this one compare to your previous three releases?
The writing process for this new album was different, normally with the writing process we’d write individually and then demo material with a third party, this time around we did everything ourselves including the mixing, the only thing we didn’t do ourselves was record the drums and mastery, but besides that everything else was done in house. Then the actual writing process we were actually influences on each other on what to write and what to play which was quite different than before so it was probably the most collaborative effort that we’ve ever tried. To me it sounds that way and we’re pretty stoked on how it’s come out and so far the feedback on it has been pretty good and I think people are aware and can hear what we’re trying to do.

I’m always intrigued in the process of writing instrumental music to form a song, is there a process where there are no words?
Well at the end of the day it’s instrumental but we still want to write memorable music  so we try to keep the song length within what we think is a decent amount of time for people to pay attention, especially live, we don’t want to have twelve minute or fifteen minute songs live where they just sound long winded and you can’t even tell what song is the next one, so we just try to keep songs that have a strong theme or maybe a bridge thrown in here or there but usually one theme that we can revolve around the song. We don’t have a set time but whatever feels natural and which seems reasonable is how we keep the songs the length that they are. This time actually we went further the average song is a little longer than previous albums but still with the idea of keeping songs reasonably short and try not to lose the attention of the listener.

Other side of that, how do you name the songs?
Once a song is written you kind of get a vibe from it and we’ll try to couple it with a theme that we have or sometimes we just like the word and it sound clever and makes sense with something, for example ‘Arithmophobia’ the song when you first hear it sounds like complicated rhythms and you can’t even tell what time signature it’s in but it’s 4/4, we thought it was a bit of comic relief to name it ‘Arithmopohobia’ which is a fear of numbers, there’s no strong theme to it but it’s a little inside jokish for us.

I do love the title, what does ‘The Madness of Many’ represent to you personally?
The madness of the three of us, it’s basically that.

Four albums in now what do you see as the biggest evolution that’s taken place between the band now compared to when you made your debut?
I think when we first started we were trying to, the music that was written we were trying to figure out how to translate it live and now the way the band has evolved live we’re trying to figure out how to translate that into recording, so we’re just trying to evolve and constantly do new things without repeating ourselves. I would say that way and the process of it.

So the other side of that rather than talk about changes, what’s the one thing you feel has stayed the same about the band in your time together?
Tosin and myself *laughs* I would just say the constant goal of trying to sound unique and stand out you know? Not trying to get stuck within our own genre of within our own little comfort zone, just trying to always expand on what the sound of the band is.

Your touring schedule is hectic leading up to the end of the year but into next year are you hitting up any new territories you haven’t yet had the chance to?
Yeah, actually right before we got to Australia we’re going to be coming from Asia, so we’ll be doing China, Taiwan and I want to say Thailand as well, so we’ve been to Japan before but nowhere else in  Asia, so now we get to go do that run followed by Australia so that should be cool. As of now that’s the main new territory. Ideally we’d like to hit up South America or somewhere new.

The one thing I’ve noticed and in speaking to people like Satriani and Vai before and seeing their shows here the crowds just love the instrumental shows here, what do you think it is about the instrumental side of music that people just attach to?
I think there’s always a population of people who are fans of technical music or seeing someone excel at music, I think that bands that are able to do that and also write catchy music is slightly different from the Satriani’s and the Vai’s who are inherently guitar centric which is the focus, for us we’re still trying to compose songs that not just guitarists can listen to or not just drummers. Trying to just make cool music and not just have it be instrumental, I think some of those are the main differences.

You’re not going to do what those guys have done and eventually have a song or songs with a singer on it?
Maybe… we keep dabbling with the idea, it would definitely be different and I don’t think it would be a normal Animals As Leaders album. It definitely wouldn’t be a metal singer, I don’t know, anything’s possible and I don’t know if it would be a full length album either.

Playing an eight string, do you ever pick up an old six string and just laugh at it?
*laughs* I actually pick up a six string and forget how much fun it is, and ultimately I kind of still write in somewhat of a similar manner, obviously there’s some limitations but as far as everything else that kind of becomes what you see.

Lastly let’s look ahead to the future, finish this sentence for me, in 2017 Animals As Leaders want to…
Take over the world and impeach Trump *laughs* our number one goal *laughs*

Latest Release: The Madness of Many (Out Now – Sumerian Records)