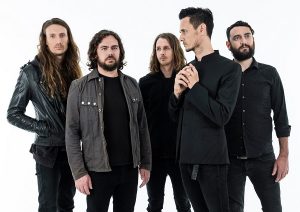 When you put on Dead Letter Circus‘ eponymous debut EP, it is still as fucking amazing as it was 10 years ago… and, in true testament to its enduring relevance, feels like it could have been recorded 10 minutes ago. The sound it created is iconic, and the bands it inspired are dotted across the Australian landscape. It is legacy. Timeless.

Re-imagining the EP to honour its anniversary, Dead Letter Circus will be touring Australia in 2017, playing the iconic tracks with a unique new interpretation. By no means the first time Dead Letter Circus have stretched the creative boundaries of their own work, The Endless Mile is in part a response to fan demand from the success of DLC’s 2014 Reimagined tour. This band – whose original conquest a decade ago was to create a new sound – prove yet again why they are one of Australia’s best, most artistically fearless bands.

Where were you a decade ago that you aren’t now? Where are you now that you weren’t a decade ago? The music we carry with us is a mixtape for our very existence – intertwined with our own memories. After 10 years on the road, three groundbreaking albums and multiple ARIA nominations, Dead Letter Circus are not the band they were at the beginning. They are a band at their peak… and The Endless Mile is a celebration of their utterly remarkable story.

“I literally can’t wrap my head around that this crazy ride has been going for nearly 10 years,” frontman Kim Benzie recalls. “I still remember pulling over the car yelling and screaming when I heard Disconnect and Apply on triple j for the first time. The fact that people connected so deeply with our frantic hyper rock to this day still blows my mind.”

“We thought the most fitting way to honour the 10 year anniversary of the EP and the people n the audience who became our road family, was to completely re-invent and invert the songs in a new studio form, and take them on road to some of our favourite venues. We can’t wait to show you the new versions of the songs.”

The Endless Mile will take DLC to to Brisbane, Sydney, Newcastle, Melbourne and Adelaide in March 2017. Tickets will go on sale Wednesday, December 14 at deadlettercircus.com for $35+BF.

The band will be releasing a limited edition recording of the reimagined EP, available at all shows on The Endless Mile.