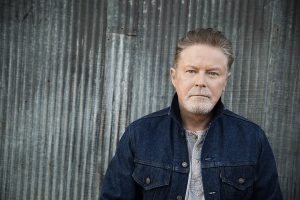 Frontier Touring are honoured to announce the return of Eagles co-founder, vocalist and drummer Don Henley to Australia and New Zealand in March 2017 for a run of indoor and a day on the green outdoor shows.

Last in Australia and New Zealand in early 2015 with the Eagles, Don Henley’s 2017 tour will see him perform songs spanning his entire career from the Eagles and his vast solo catalogue, including songs from his latest album Cass County (out now through Capitol Records) which was named after the East Texas county in which he was raised.

Don Henley will be joined on stage by his fifteen-piece band for a show that has had critics raving in the USA and UK:

‘The entire evening is literally hit after hit that has defined his career from the Eagles and as a solo artist.’ – Seattle Music News

Joining Don Henley on all of his Australian and New Zealand dates will be American singer-songwriter Jewel.  The multi GRAMMY Award winner launched to stardom in 1995 with the release of her debut album Pieces Of You, which went on to become one of the best-selling debut albums of all time.  With more than 25 million record sales to date, her impressive back catalogue includes hits such as ‘Who Will Save Your Soul’, ‘You Were Meant For Me’, ‘Foolish Games’, ‘Intuition’ and ‘Hands’.  Jewel has graced the cover of TIME Magazine and has been recognized as one of the most “sparkling songwriters since Joni Mitchell” by the London Times.  Touring in support of her new album Picking Up The Pieces (out now through Sugar Hill Records), her latest work marks a return to the sound of her breakthrough first album, with strong emotional narrative and stripped down accompaniment.

Don Henley, as both a solo artist and as a member of the Eagles, has received many accolades, including eight GRAMMY Awards, numerous gold and platinum records and performed sold?out concert tours worldwide. A respected, popular and critically celebrated musical artist, Henley is a founding member, vocalist and songwriter of the Eagles, one of the most influential bands in America. Henley’s solo career is acclaimed with such hits as ‘Dirty Laundry’, ‘Heart Of The Matter’, ‘The Boys Of Summer’, ‘The End Of The Innocence’, and ‘All She Wants To Do Is Dance’. He was inducted into the Rock & Roll Hall of Fame in 1998.

Henley’s career as a musician and activist continues to evolve. In 1990, he founded the Walden Woods Project, a not?for?profit organization dedicated to protecting the historic woods in Massachusetts where author/philosopher Henry David Thoreau first championed the concept of land conservation.

The Project, celebrating its 25th anniversary, has protected vast tracts of Walden Woods from the threat of commercial development, has created a highly acclaimed environmental educational initiative for students, and maintains the most important library of Thoreau?related research material in the world.  In addition, Henley founded the Caddo Lake Institute in his native East Texas, a privately operating foundation to act as an “ecosystem?specific” sponsoring entity, underwriting local wetland science and conservation education including cultural and ecological research and monitoring. Henley also co?founded the Recording Artists’ Coalition, a nonprofit, nonpartisan group formed to represent the interests of recording artists.

A DAY ON THE GREEN CONCERTS