Orlando, Florida-based rock legends Alter Bridge are today announcing that they will return to Australian shores in April 2017, presented by MJR Presents. Early October 2016 saw Alter Bridge release their latest studio album ‘The Last Hero’ in Australia – to an ARIA #6 album chart debut. With an obviously loyal and ravenous fanbase down under, Alter Bridge are coming down under to celebrate the success.

Alter Bridge’s album Fortress was released in 2013 and it was clear their fans were eagerly waiting for them to return. Now the rock juggernaut comprised of Myles Kennedy on vocals/guitars, Mark Tremonti on guitars/vocals, Brian Marshall on bass and Scott Phillips on drums are returning to Australia on the back of their fifth album, The Last Hero.  The new release is a monster that builds upon the sound that Alter Bridge has become known for with their uncompromised vocal melodies, untouchable dueling guitar work and pounding rhythm section.

Founded in 2004, the quartet immediately went gold in the US with their debut album One Day Remains – and that was just the beginning. Each and every subsequent critically acclaimed release would hit the top album charts in Alter Bridge`s home country, find partnerships with the likes of WWE, MLB and ESPN, and concerts around the globe created a legion of supporters known as the AB Nation! Europe also pledged their allegiance. Alter Bridge`s 2013 effort Fortress gave the band their highest chart entries in Germany, the UK, Austria and Switzerland.

The Last Hero creates musical imagery to showcase a common theme that runs throughout the record: paying tribute to, and touching on the need for heroes and leaders in a complex world. “Show me a leader that won`t compromise – show me a leader so hope never dies.“

Produced by Michael “Elvis” Baskette (Slash, Trivium, Tremonti etc) and mastered by Grammy award winner Ted Jensen, The Last Hero is the diversified and resolute rock album we have all been waiting for: welcome back, Alter Bridge!

Ultimately, Alter Bridge heroically deliver for fans worldwide and rock music at large. “It’s good to be back in the Alter Bridge battle,” Myles leaves off. “Every time we tour, I’m reminded of how great it is to have this passionate and loyal audience. We don’t take it lightly. We consider it an honor that people let us into their lives that way – and we can’t wait to see our loyal fans down under in April.” 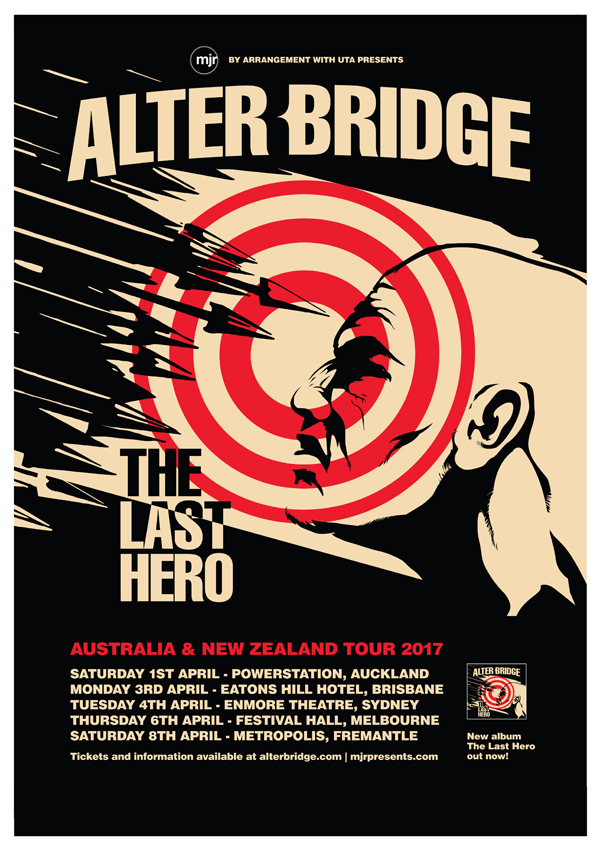