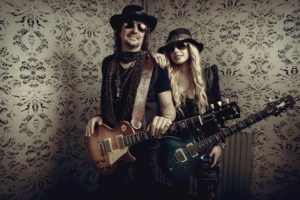 It is with genuine regret that RICHIE SAMBORA and ORIANTHI have been forced to cancel their upcoming performance at Metro City in Perth scheduled for this Friday, 23rd September.

The recording of their new album with producer Bob Rock is at a critical stage and they have had to delay their arrival into Australia.

Performances in Adelaide, Melbourne, Sydney, Brisbane, and as part of the NRL Grand Final Pre-Game Entertainment, are unaffected and will continue as planned.

Perth ticket holders will be automatically refunded if purchased by credit card, directly by point of purchase – either via Ticketek, Oztix or MegaTix.

Richie and Orianthi apologise to all of the fans that will miss the show but hope to return to Perth before too long to perform live after their album is released.

“We are devastated to have to cancel our Perth performance, although we are working on something very special in the studio and can’t wait for you to hear it. We look forward to performing it live when we come back to Australia.”