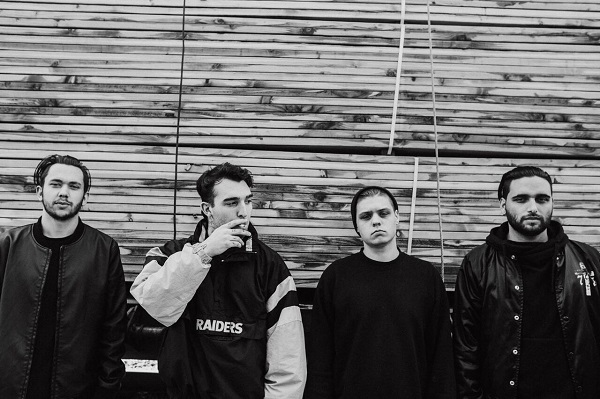 From Release: Passionate New Orleans outfit CANE HILL have formulated a brand of US metal that is both pummelling and thought provoking. On their maiden Australian tour, these Warped Tour 2016 alumni will prepare for gargantuan UK run with Bullet for My Valentine and Killswitch Engage. They’ve also just scored a Metal Hammer Golden Gods Award nomination for Best New Band.  A worthy addition to a truly jaw-dropping metal bill.

On the tour bus and stopped in Milwaukee we chatted to Witt of Cane Hill about the band’s new album ‘Smile’, coming to Australia, what makes them better, and more…

You’ve just released your debut album, what’s the process like putting together an album where you’re essentially introducing your band to the world?
Five parts exciting, five parts terrifying.

With an EP out prior, did you go into making the full length with a different mindset?
I guess kind of , I think it’s more the fact that it’s the second thing, I mean the full length can clearly have much more importance to it, so every time we’ve gone into the studio we’ve just tried to make something better than what we made last, didn’t really matter what it was.

What did it allow you to do differently?
I think we kind of had a lot more time on the road to figure out what we wanted to do and where we wanted to go with it whereas before we were living completely different lives at home so there was a lot of experiences that went into it and that really benefited us, so it definitely shaped the full length in a way that was different from the EP.

Of course it also has the most metal name ever in ‘Smile’, what was the idea behind using that as the album name?
Just like a little bit of irony, some tongue in cheek shirt. There’s so much shit going on that’s well and truly fucked, the only thing you can do to keep yourself sane is to sit back and smile.

So is that the sort of message or idea you wanted to deliver with the album?
I guess, I didn’t go into it with any specific point to convey, just a bunch of things I guess.

You’re heading to Australia this October with Bullet and Atreyu, being your first time to Australia how do you go into a new territory to try and win them over?
With the biggest balls we’ve got. We just go there and do exactly what we would do anywhere else, we’re not going to cater it to where we’re going and we just go in, give 100%, leave and whatever comes of it comes of it.

You’ve toured with both bands before, what kind of mischief can we expect from you guys on tour?
They’re kind of some of my favourite people to tour with, yeah. We’ve done a bunch of different tours with both bands and they make everything so easy.

Have you spoken to the guys about what to expect down here?
Yeah they’ve told me there’s going to be so much excessive drinking that we’re going to go home with tremors… so I’m excited.

In your five years as a band what have you learned that has already made you better?
I don’t know, like fuckin five million things man, we learn something new every day, we’re in a different place, different time every single day of your life and there’s so many experiences you take out of it, it’s like you become a completely different person and you become a completely different band as far as professionalism and that. *laughs*

Touring wise what do your plans look like after Australia?
After Australia we go to the UK with Bullet and Killswitch (Engage). I have three weeks at home until Christmas *laughs*

Lastly, with the year on the downhill let’s predict the remainder of it. So finish this sentence for me, by the end of 2016 the one thing Cane Hill wants to do is…
Hmm… drink a full bottle of champagne on stage and vomit it up afterwards.

OK, well do that in Sydney, that would be fun to see…
Bring me some champagne…

Done, I’ll bring the bottle and we’ll sort it out
*laughs* I’m excited!

Catch Cane Hill in Australia with Bullet For My Valentine and Atreyu at the following dates:

Tickets on sale now via tickets.destroyalllines.com

Presented by: triple j’s The Racket and Destroy All Lines & Chugg Entertainment