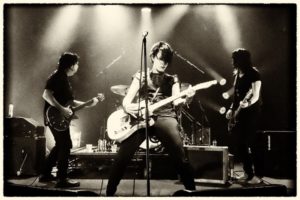 Baby Animals, one of Australia’s most revered rock bands, will tour early 2017 to mark the release of single ‘One Word’ 25 years ago.

The band, fronted by the enigmatic Suze DeMarchi, alongside guitar legend Dave Leslie, bassist Dario Bortolin and drummer Mick Skelton, is a force to be reckoned with – time has not diminished the immense respect this powerhouse four-piece commands.

Suze and Dave burst out of Perth in the late 80’s with a swagger reminiscent of their contemporaries INXS, and a freshness and vibrancy unchallenged at the time.  Instantly embraced by radio and audiences and melding perfectly with the very fabric of the Aussie pub rock scene, the band made an impact with their debut self-titled album from day one.  Working with industry luminaries such as Mike Chapman, Kevin “Caveman” Shirley and the inimitable John Woodruff, Baby Animals shook Aussie rock to its very foundations.

Emerging from this debut album was the melodic and ‘hooky’ One Word – a signature ‘power ballad’ that continues to stand as an anthem until this day.

Reflecting on what is now one of the most popular songs in their live set, and a track so synonymous with the band, Suze and Dave shared their thoughts on the song that they’re now very happy to pay homage to!

“One Word was my least favourite song on the album and I begged the label to not even put it on the record!!  I remember when Dave was recording the intro guitar part how frustrated he was but he ‘played it till his fingers bled’ and it really made the whole track come alive. Now, I love looking over at Dave’s face whenever we start this song and have a private giggle in memory of that day and grateful that, once again, the label didn’t listen to me!  It went on to become one of the most memorable and successful BA tracks ever and I love playing it.”  SUZE DEMARCHI

“I remember back in 1989 when I first heard this cute little demo of a ditty which Suze had brought back from London. I thought it sounded more like a country song and had no idea that it would go on to become the band’s highest charting Australian single. It reminded me of this song “Brimful of Asha” by Cornershop.

It wasn’t until we started performing it to bloodthirsty Australian crowds that it transformed into the bombastic juggernaut of its current form. Complete with distorted acoustic guitar intro (conceived on the morning of tracking) it remains a crowd favourite and always puts a smile on my face when I see it next on the set list. We are still waiting for a laundry detergent company to pick it up for advertising. ‘One Cup in a tub of hot water, and your wash will be so much brighter…’ “ DAVE LESLIE

Ahead of their 2017 tour dates the band will headline Hope Rocks on at picturesque Hope Estate in the Hunter Valley.  This massive event on November 26 will sees Baby Animals joining Screaming Jets, Ian Moss, Richard Clapton Dragon and more – the ultimate Aussie rock line up in the Hunter Valley.  Tickets are selling fast for this guaranteed rock ‘n’ roll good time!

Baby Animals are strong supporters of the charity Habitat for Humanity, an international organisation building houses for the poor globally. Across the last 40 years, Habitat for Humanity has built over 800,000 homes in over 70 countries around the world, mobilising 2 million volunteers globally.

From October 22-29, Australian volunteers will travel to Indonesia with Habitat for Humanity – it is a facebook led campaign that will see Aussies uniting for good – building homes for the poor in Yogyakarta.  Suze DeMarchi will be joined by 150 Aussie volunteers, who have pledged to raise at least $280,000, with a goal to build at least 12 Habitat houses. For more visit: www.rockthehouse.org.au

Rock fans, strap yourself in to celebrate 25 years of One Word with Suze, Dave, Dario and Mick – an experience not to be missed!

On sale: Monday 5th September – 9am (local times) via www.babyanimals.com.au

– Melbourne’s Palace Of The King will join the band on all dates ex Adelaide.