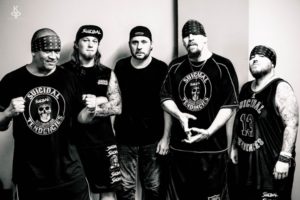 On September 30 the legendary punk/thrash icons SUICIDAL TENDENCIES will release the follow up to their latest effort ’13’. The new record entitled WORLD GONE MAD will be the band’s first studio album featuring the legendary drummer Dave Lombardo (Slayer, Phantomas, GripInc, Dead Cross) and the new members Ra Diaz on Bass and Jeff Pogan on guitar.

Dave Lombardo first joined the band on the last US tour (that saw Suicidal Tendencies as main support for Megadeth), is now officially a member of the band and driving force behind the new release.

WORLD GONE MAD is 11 songs that are Cyco and brutal with a true honesty that Suicidal Cycos expect (the CD starts off with the instantly memorable ” Clap like Ozzy”, which deals with life and death and what we make of it).
Never afraid to push the boundaries, this album also features those unique elements that Suicidal has always put in their studio releases throughout their almost 35 years career. 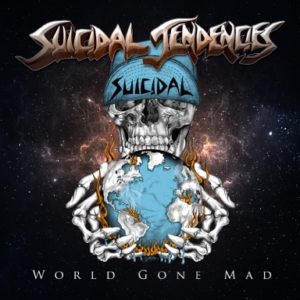 On first album recorded with Dave Lombardo, Mike Muir states:
“It’s interesting, because a lot of people, obviously, associate Dave with the Slayer sound.”
“When you hear how he literally attacks the various STyles on this album, you’re instantly blown away at not only how insane of a drummer he is, but also how tremendously diverse a drummer he is. Dave is a true legend, but I believe even a lot of his most hard core fans will be blown away at what he’s brought to this record.”

Muir continues, “He’s a great guy, amazing to work with and whether it’s live or in the studio, he brings a whole different intensity and rhythmic feel to the band. And he’s definitely got the Cuban thing going on, that Latin flavor, where he gets to do show a little bit more of that style in Suicidal. When you hear it you definitely know it’s Dave, but it definitely takes us to another level. I’ve always been a huge fan, now even more so!”

On having Dave Lombardo as permanent member of the band, Mike Muir says:
“Dave is very serious. I can’t fake what I do; he can’t fake what he does. He’s up there and just doing his thing. And it sounds so powerful, and yet it’s so fun. I mean, that’s one of the things with touring with him, it’s just refreshing that it’s, like, ‘Bam!’ We just do it, but it definitely does add such intensity. I mean, going years back, I’ve always known Dave and been a huge fan and I’ve always kind of said ‘Wow! If we had someone like Dave playing with us’…You know, you get those little things sometimes in your head, never expecting it to happen. And now we actually do.”

Dave Lombardo on the new record:
“I think it’s very typical and very traditional Suicidal Tendencies. It’s that unforgettable style. It’s Mike Muir. He is a legend and has a very special style in which he writes his music, his lyrics and his structures. And I love it; I love it. It takes me back to how it all started, which was that punk attitude. I’m very happy to be a part of his organization. I feel very welcomed. I feel very much appreciated, and there’s a lot camaraderie and respect amongst the musicians. We have a really good time together. We hang out as a band, which is very important. I’m honored to be a part of Mikes legacy and can’t wait for this album to drop.”
While Lombardo is driving the sound, new guitarist Jeff Pogan, and bassist Ra Diaz are bringing a much needed attack to the rhythm section to keep up the intensity.

Ra Diaz from Chile is a great story, the bass player who practiced and practiced to one day be in his favorite band and follow the legendary bassists Robert Trujillo, Josh Paul and Steve ‘ Thundercat’ Bruner.
His friends said he was crazy, but his family believed in him as he first left to Mexico, then America and then finally getting the call earlier this year. Said Diaz, “I’m extremely honored to be a part of this band’s history and legacy. Listening to ST influenced me in so many ways and knowing that I might be able to do the same thing for others with this album is truly a dream come true.”

Another great story, Jeff Pogan from Florida started with the band as guitar tech, moved on to help engineer the album and then picked up the guitar and got the first and only guitar audition. Said Pogan, “Being in a legendary band allows me to not only learn from the history, but to challenge myself to carry on and expand that tradition to the next generation of Suicidal with the new CD, and bring it live each and every gig and tour”.

Add to that the already insane guitar playing of Dean Pleasants who’s been in the band going on twenty years now and the foundation is set for the next chapter of Suicidal. Pleasants said, “In the over 25 years since we started Infectious Grooves (with Robert Trujillo and Mike Muir) to joining ST and playing on numerous albums and world wide tours, it’s amazing to see so many generations of ST Maniacs, from young to old, getting more excited then ever! I am overjoyed about the new album and can’t wait for everyone to hear it. We believe it’s the truly represents the essence of Suicidal Tendencies and can’t wait to take them to you live!”

Last words by Muir, “I really felt it was important that we had people in the band, that love the band, understand its history, respect its history, but are dedicated to adding to that history and going next level. That every night they will carry that honor and give it their all and understand why the crowd is there”. “Personally, It’s been the most fun I’ve ever had in the band and I’m so thankful to be a part of this band and family.”

The world truly has gone mad, but that’s not stopping these Cycos!
Suicidal is back, recruiting the New Degeneration September 30!