Doug Aldrich of The Dead Daisies 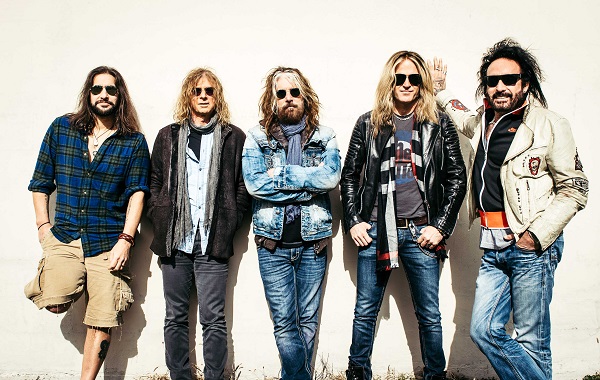 “This time with The Dead Daisies record was all five of us in a room from start to finish, we wrote it together, we recorded it together live and really it was a lot of fun because everyone was invested in it, everyone was excited with what we agreed that we’d record.”

From release: The Dead Daisies’ superlative new studio album ‘Make Some Noise’, set for release on SPV Records on August 5th, is a vital, vibrant and utterly uplifting opus, which way more than lives up to the legendary ‘classic third LP syndrome’ epithet. ‘Make Some Noise’, packed with huge hooks, giant, intense guitar riffs and glorious, distinctive vocals, celebrates the kind of classic rock ‘n’ roll that has gone from strength to strength ever since it emerged in the early 1970’s and that sweaty clubs, concert halls and stadiums the world over would be impossible to imagine without. Each of the joyously performed, perfectly crafted, melody drenched 12 songs instinctively aims straight for the centre of the listener’s autonomic nervous system, totally enveloping the heart and soul and compelling them to move to the irresistible rhythm.

While he was in Las Vegas we caught up with Doug Aldrich for a chat about The Dead Daisies… joining the band, the new album ‘Make Some Noise’, touring and a sneaky little chat about Revolution Saints…

Thanks for your time, Doug. Of course you’ve only recently joined the band, how is everything coming along?
It’s really good, man. The record turned out great, we’re really happy with it, it’s just a straight up, no frills, kick ass rock and roll record, riff rock and really great for driving. It doesn’t deviate too much and there’s good points and bad points but one thing about this record is that it doesn’t deviate and that for me is a good point. Sometimes if you have a record like that you can say it’s all the same stuff but each song is really unique but they’re all kick ass, there’s no ballads on it which I kinda dig. We had written a couple of ballads and really good stuff that maybe we’ll use in the future but the producer Marti Frederiksen said ‘I don’t really know where to put this ballad, it breaks up the record too much and I want it to be kick ass straight up how Guns N Roses first record was’ kind of thing.

You’d worked with Marco and Brian before, did that make it easier to gel in an already existing band?
Well yeah because you know the personalities. It’s always nice when you work with someone and you know them and those guys were both really good friends of mine, it wasn’t like we worked together and that was it, we really got on great in Whitesnake, so yeah we’re really digging it. I’ve known John Corabi since 1979, he was a couple of years older than me and he had a band that played in New Jersey and we used to go down, we had these fake ID’s and we used to go down to New Jersey. Then I just recently met David Lowy, David’s obviously the founder and leader of the band, I feel like he’s put together a great line-up for this album and tour. I’m really happy to be part of it.

Of course we have the new album ‘Make Some Noise’ coming this August, how did making this album differ in any way from previous bands you’ve been involved with?
It differed a lot because most of the other bands, since the last record I made like this was in around 89 or 90, I did a record with House of Lords and then I did another record with my own band called Bad Moon Rising and we cut all that stuff together as a band. Then later on as home studio recording started to get more popular and people were able to take the sessions from different studios, bands would record in different places and it changed. For example the last few Whitesnake records that I produced with David Coverdale we would record the drums and then overdub the guitars and bass and then vocals would come last, and then keyboards would be at the end too and that’s kind of how we got used to making records. This time with The Dead Daisies record was all five of us in a room from start to finish, we wrote it together, we recorded it together live and really it was a lot of fun because everyone was invested in it, everyone was excited with what we agreed that we’d record. That’s another thing that I like about this record is that it doesn’t step on the toes of ‘Revolucion’, ‘Revolucion’ has its own sound, it sounds like The Dead Daisies, this line up sounds like The Dead Daisies but it’s like some of those bands that we loved in the seventies, Led Zeppelin or Aerosmith they would make a different record every time, it wasn’t like they were trying to make their only hit record. Like Led Zeppelin III is like an acoustic record and I really love that record, so that’s a good thing, to add to the catalogue as opposed to try and repeat it.

Coming into a band on a roll and when they may already have material written, were you able to say ‘whoa hang on’ and contribute to the writing of the tracks?
No they didn’t really have anything that was set, they kind of used it for the last record and I really loved the last record, I thought it was a great record and they did really good with it and I didn’t really think about what we’d try to write, we just put in our different ideas and different riffs, everyone plays guitar  so everyone had some riffs or chords, and we by the end of two weeks basically had twenty five or thirty songs and our producer narrowed it down to I guess eighteen and then we all voted and cut it down to twelve and eventually we cut it down to eleven.

The album and the band have always had that classic rock sound to them, and throwing in a tracks like ‘Fortunate Son’ and ‘Join Together’ was great, how did they get chosen and what was it like rockin’ those ones up?
The band had actually done a version of ‘Fortunate Son’ before and it was a last minute situation where they said why don’t we cut that song real quick, they’d played it live and had a lot of success with that. We cut that in basically two takes. ‘Join Together’ was an idea that John Corabi had, he said what do you think if we cut that song, we can turn the riffs into something and make it our own, and that’s pretty much what we did, we changed the riffs, made the song a little heavier but then once the band kicks in on the verses it’s the same and we really liked that. I think with The Dead Daisies the concept has always been to do covers, or do them live because basically it’s kind of a seventies style band, it’s a throwback to the artists of the sixties and seventies like Jimi Hendrix would do a cover of a Beatles song just for fun because he enjoyed the process of playing a hit song that’s out at the moment playing it just like how he would do it. So that kind of thing is really cool and The Dead Daisies had been doing that since the get go and there’s a few covers that we’ve talked about that we haven’t really gotten to but we’ll keep fishing for some songs to play live.

You guys worked with Marti Frederiksen as the producer, he’s made some big rock records, what did he help bring to the album other than leaving ballads off?
He basically had five of us in a room banging around ideas and he was really good as in the beginning was a little chaotic and he said ‘why don’t you guys split up’ like me and Brian went in the other room, John and Marco went there, David and Marti went in that room and we all got together and showed each other what we had come up with that day and that was the start of my really huge respect for him that he was able to organise five guys with all these ideas and make it work.

You’ve got a pretty packed touring schedule on the cards too, You would’ve seen a fair bit of the world, but is there anywhere you haven’t yet played that you’re hoping to get a chance to with The Dead Daisies?
We’ve never played China that would be cool, but at the same time I love playing in The US, playing at home too… I’ve spent a lot of time in Europe over the past ten years, so it’s basically wherever my amp and guitar is I’m happy to play.

I have to ask, when do you think we can expect to see The Daisies back in Australia?
I would love to come to Australia, I’ve only been there once, so it would be absolutely awesome to be able to go with The Daisies over there. Hopefully we’ll get over there early next year…

Man, on a side note I have to say, that Revolution Saints album was absolutely amazing!
Thank you, thank you so much. Too bad the band couldn’t really get it together, it was just schedules, at first I wasn’t even able to make the record because I was so busy with Whitesnake but then after I left Whitesnake I was able to do the record and I had taken a gig in Vegas and I needed to be home with family for a little while, I have a boy that was six years old and being a Dad and the reason that I work so hard in my life is basically for him and my kids and it’s what makes it all worthwhile. Of course I love music and I’ll always play but I just needed to take a break from the Whitesnake extravaganza as it were. So basically Deen and Jack were still busy, Deen was busy with Journey and Jack was busy with Night Ranger and we had some great offers for tours we just couldn’t get it together as far as schedules. Now Deen is free, he’s out of Journey he’s in recovery and doing really great I’m really proud of him, and Jack is doing Night Ranger, so I think that was a one of a kind thing that happened. Actually it started off it was going to be Deen’s solo record and then he asked me to play and he asked Jack to play and then we started talking and said ‘wait a minute, let’s make this into a band *laughs*’ and we went along with it and they came up with the name and that was it. It just wasn’t palatable to keep it going.

From: All over the world