BON JOVI announces ‘This House Is Not For Sale’ 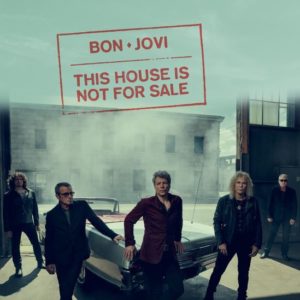 Iconic, Grammy Award-winning superstar band, Bon Jovi makes a massive return with “This House is Not for Sale,” the title-track from their upcoming new album THIS HOUSE IS NOT FOR SALE, slated for release on October 21 in partnership with Island/UMG.  The single is available here.   The music video can also be viewed on Vevo HERE.

THIS HOUSE IS NOT FOR SALE is Bon Jovi’s 14th studio album since their 1984 debut. Earlier this summer, the band (Jon Bon Jovi, David Bryan, Tico Torres, Hugh McDonald, Phil X) tweeted a photo from inside the studio announcing simply, “THE ALBUM IS DONE.” (Billboard’s coverage of the event HERE). It reunites the band with Grammy Award-winning producer John Shanks, who began working with the band in 2005, for the RIAA platinum Have A Nice Day album, which entered the charts at #1 in 15 countries worldwide.

This will be their first major release since What About Now (2013), which was the band’s third consecutive multi-platinum album to enter Soundscan at #1 (following Lost Highway in 2007, and The Circle in 2009).

Over an illustrious career spanning more than three decades since their formation in 1983, Bon Jovi has earned their place among global rock royalty.  With over 130 million albums sold worldwide, an extensive catalog of hit anthems, and more than 2,800 concerts performed in 50 countries for more than 35 million fans, Bon Jovi is the consummate rock and roll band.

Bon Jovi “This House Is Not For Sale”