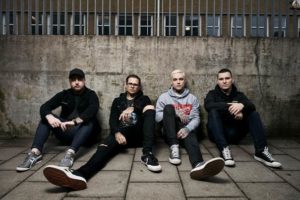 The Amity Affliction have continued to chalk up impressive, history making milestones as they claim their third consecutive #1 ARIA chart debut this week with their new album This Could Be Heartbreak (out on Roadrunner Records)! They are the first local heavy band to ever achieve so many #1 debuts and join a very short list of Australian artists to accomplish the distinguished feat, among them Silverchair, John Farnham, Hilltop Hoods and Missy Higgins.

While they continue to smash records at home, the band have also started to leave an irrefutable impression on the international markets with This Could Be Heartbreak crashing into the US Billboard chart just shy of the top ten at #12. TAA also made substantial headway in the UK market doubling the previous album sales in the UK with a #1 on the UK rock chart and #51 overall.

This Could Be Heartbreak follows 2014’s Let The Ocean Take Me, which was certified Platinum in the wake of the biggest Australian shows of their career with the Big Ass Tour. The tour at the end of last year saw the band tackle capacity audiences at some of the country’s largest stadiums – Rod Laver Arena, The Riverstage and Acer Arena among them.

Renowned worldwide for their powerful live performances, after tirelessly touring the international live circuit in recent months, The Amity Affliction are currently hammering out tracks from This Could Be Heartbreak for the first time to an ardent hometown crowd as part of their sold out This Could Be Heartbreak underplay shows (which sold out within five minutes of first going on sale), before heading off again to the US and Europe with dates taking them through right until the end of the year…a telling testament that The Amity Affliction are here to stay with sights firmly set on their next challenge.

The band has also recently announced the Death To Misery regional tour of Australia to take place in January and February of 2017 with Hellions and Ocean Grove.