SCORPIONS – 50th Anniversary World Tour – FOR THE FIRST TIME EVER IN AUSTRALIA! ONE SHOW ONLY 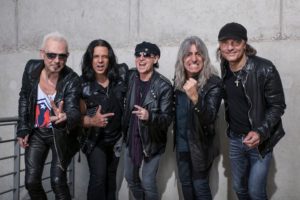 German heavy rock icons, SCORPIONS, will be bringing their 50th Anniversary Tour to Melbourne for their first-ever Australian show.

Tickets for this special event will go on sale at 10am Friday, July 29.

Telstra Thanks is bringing an exciting 48-hour pre-sale just for Telstra customers from midday Tuesday, July 26 until midday Thursday, July 28. For more information on how to purchase, visit: telstra.com/music.

Five decades have passed by since the days the juvenile Klaus Meine, Rudolf Schenker and Matthias Jabs wandered the streets of Hanover, then just awakening from post war paralysis, with a barrow carrying their instruments and amplifiers. In those 50 years, they have become arguably Germany’s most successful rock band, accumulating unit sales of more than 100 million, including certified album sales exceeding 22 million.

1979s Lovedrive was the band’s first album to reach the Billboard 200, followed by the Top Ten hits Savage Amusement (1988), Love At First Sting (1984) and Blackout (1982). Top Ten Billboard hard rock albums include Sting In The Tail, Comeblack and MTV Unplugged.

The band’s 1991 mega-hit ballad ‘Wind Of Change’ peaked at #2 on the Billboard chart and hit #1 in seven countries, while the anthemic ‘Rock You Like A Hurricane’ has been covered more than 150 times by different musicians.

Few rock bands of this caliber take to the stage as often as Scorpions, embodying a much envied reputation as one of those very rare bands that have transcended time and risen far above the crowd.