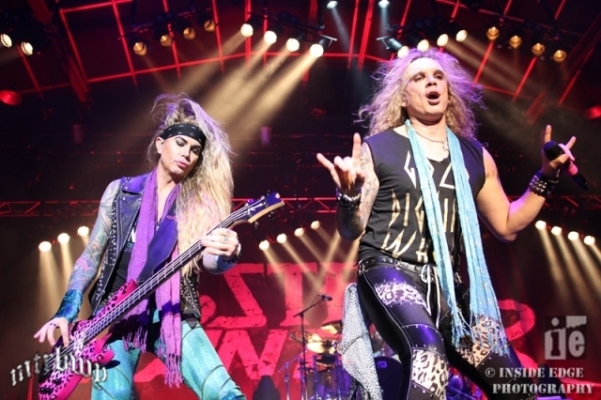 The first night of the 2016 Steel Panther Tour Down Under was a sold-out show at the Big Top, Luna Park, and the venue filled up pretty fast as the doors opened.

Deep south rockers Black Stone Cherry, who had rescheduled their own dates to join this tour as the sole support act rolled out on to the stage to a healthy crowd, and proceeded to win over the entire room – many of whom had very limited knowledge of the band.  Featuring a greatest hits package, including songs from new album ‘Kentucky’, Chris Robertson led the way with the gravelly southern drawl, leaving guitarist Ben Wells and bassist John Lawhon to roam the stage with the rock star poses.

“Me and Mary Jane”, “SOUL Machine” and “White Trash Millionaire” all hit the mark, although a few technical issues with the guitar sound got in the way, and by the end of the set, the place was packed with a very noisy crowd.  “Lonely Train”, the first song they guys wrote, brought the set to an end…..then we hear the traditional farewell line “We are Black Stone Cherry…….We Play Rock’n’Roll”, and the band steams into an edited powerhouse version of “Ace of Spades”.

After the normal interval, featuring some cracking classic rock tunes, we get the lights down, and Blackout in the Red Room roars out of the PA, until the larger than life Steel Panther prowl onto the stage.

Slick, choreographed, trashy and downright filthy at times, they put on a rock show worthy of many of the bands they emulate, and credit to the lighting engineer for exceeding expectations!

Michael Starr and Lexxi Foxx are the focal points for much of the set, with “Eyes of a Panther”, “Tomorrow Night” and “Fat Girl” warming everyone up, and then the storytelling begins, with a long period of intros, jokes and insults traded, before the excellent “Just Like Tiger Woods” and the dirty “Let Me Cum In”  lead the way into the first piece of audience humiliation – “Asian Hooker” sees a girl from the crowd pulled up to perform with the band, before they pile into “Gold Digging Whore”, which features a great solo from Satchel, and some hairspray work to prepare for his ‘Eruption’ style solo, made more interesting as he heads behind the kit to play the bass drum at the same time, churning out some classic rock riffs, and finishing with our own “Advance Australia Fair”!

A sparkly red coat drapes Starr for party-anthem “Ten Strikes You’re Out”, before the second victim (or perhaps someone they prepared earlier), a leopard-print barely clad blonde, who was the target of a very tacky acoustic version of “Girl From Oklahoma”.  Suspend all good taste, and just enjoy the show!  More girls pile onstage for the obvious “17 Girls In A Row”, then into “Gloryhole” and “Eatin’ Ain’t Cheatin”, before “Death to All But Metal” closes the set.

Encores of “Community Property” and “Party All Day” again show the musical chops and undoubted talent of all the band members, and the songs are generally great feel-good party rock tunes……so if you’re prudish, tune the words out and just enjoy what is a Helluva Show!