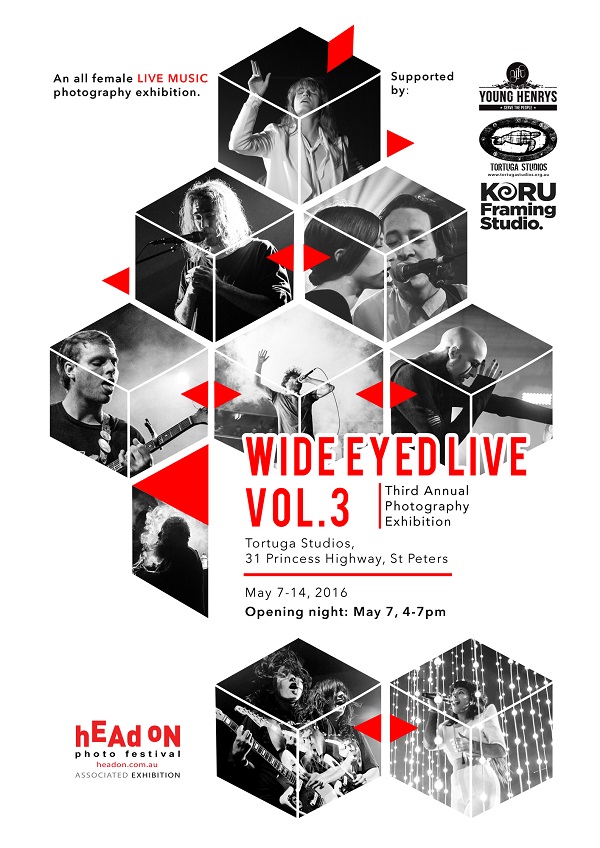 This May, the highly anticipated “Wide Eyed Live” exhibition is making its comeback, after two successful years, with a spin in a different direction: Wide Eyed Live Vol.3 will be Australia’s first all female Live Music photography exhibition, directing its focus away from a strongly male dominated music industry.

The showcase is based around some of Sydney’s most dedicated female photographers, who continuously rough it out in the photo pits, to capture the most vibrant shots from the current music scene and beyond.

Expect to see an artful selection of photographs of your favourite bands doing what they do best – owning the stage. International pop and rock idols, as well as local talent, captured on camera in the first 3 songs of their shows, within the past 12 months.

An exclusive gallery opening night will be held at Tortuga Studios, as a part of Head On photo festival. Proudly supported by Koru Framing Studio and the legendary Young Henrys brewery.

We invite you to have a look at some excellent artwork on display, listen to some sweet tunes and enjoy a few beverages at the same time.

Photographers displaying their work are: Angela Padovan, Alicia Stephenson, Annette Geneva, Belinda Dipalo, Clare Hawley, Gwendolyn Lee, Jodie Downie, Kierra Thorn, Maria De Vera, Megan Carew and Rhiannon Hopley – who work for many major media publications, including, but not limited to: The Music, Music Feeds, May the Rock Be With You, Amnplify and The Au Review.

These women are impassioned by their love of photography, the connectedness that comes from live music and the impact a great photograph can leave on the viewer.

We look forward to seeing you on 7th of May at Tortuga Studios !