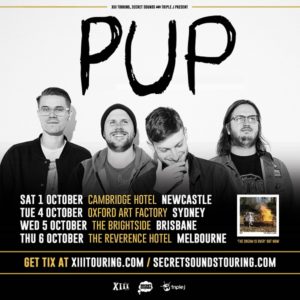 Toronto punk four-piece PUP are heading back to Australian shores in support of sophomore record The Dream Is Over out May 27 via SideOneDummy/Cooking Vinyl.

Named for the first thing doctors told singer/guitarist Stefan Babcock after a recent examination of his damaged vocal chords, The Dream Is Over finds PUP as confident and as in tune with each other as they have ever been. It’s a conscious act of rebellious defiance that turns this crazy dream of theirs back on its head. If anything, The Dream Is Over is a visible, visceral proof that the dream is, in fact, very much alive.

Since the 2014 release of PUP’s self-titled debut, this ferocious four-piece has truly taken the world by storm. They were listed amongst Rolling Stone’s Breakout Rock Acts of 2014, named one of Kerrang’s 20 Hottest Bands In The World Right Now and garnered nominations for three JUNO Awards, including a 2016 Video Of The Year nod for “Dark Days,” and two nominations for the Prism Prize. They’ve toured the world twice over, playing over 300 shows in the last two years.