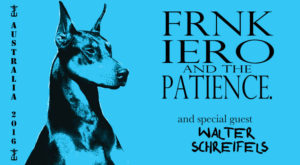 FRNKIERO ANDTHE PATIENCE. have announced they’ll be bringing their punk fury to Australia on their first national tour in October with special guest from New York, WALTER SCHREIFELS.

In January, FRNKIERO won the hearts of Aussie fans when he decided to come to Australia to perform free acoustic performances after the cancelation of Soundwave 2016. The overwhelming turn out blew Frnkiero away. “I’m honestly still speechless over the response we had when we played in January. I was really bummed when Soundwave got cancelled, so to have been able to come to Australia anyway and do it on our terms to such an overwhelming response was beyond a dream come true. It was amazing.”

He’s thrilled to return with his band. “I really can’t wait. I’ve been looking forward to this for two years. When Stomachaches first came out one of the places I really wanted to bring the band to, was Australia. And now we finally get to make it our first stop with a new record on the way. I truly couldn’t be happier.”

Tickets for all shows go on sale at midday this Thursday, May 26.

My Live Nation members can be among the first to secure tickets during the exclusive pre-sale commencing 10am, this Wednesday, May 25.

Doing your own thing is a modus operandi that’s worked well for Iero, the former guitarist in the ground breaking outfit My Chemical Romance who was responsible for bringing (and maintaining) an old-school punk energy to that band’s bigger-than-life-and-twice-as-heavy rock vision. Frank has also spent time creating and playing with artists as diverse as Death Spells, Leathermouth and Reggie and The Full Effect, but the creatively restless guitarist has always held a hardcore work ethic, a mindset that helped propel Stomachaches, his proper debut full-length. After the release of Stomachaches, Frank went on an almost two year world tour that saw him circumnavigate 17 different countries.

Fans will be able to see what Iero’s wearing on his sleeve when he hits the road with musician, songwriter and producer from New York, WALTER SCHREIFELS. “Walter is an artist I have been a fan of and looked up to ever since I started my first band. The band’s he’s been in, the songs he’s written, and the trails he blazed has made it possible for me to do what I love. I asked Walter to play this tour with us because I want to watch him play every night and it will be an honor to be able to share those stages with him.” says Frnkiero.

WALTER SCHREIFELS was a founding member and principal songwriter for Gorilla Biscuits, Quicksand and Rival Schools. As a producer he has worked with Hot Water Music, Title Fight and many others, and as a solo artist he’s toured the U.S., Canada, Japan, Europe and the U.K.. Head down to the shows early and see what surprises are in store during Walter’s set each night.

What should fans expect on these shows? Frnkiero says, “I think fans can expect to finally hear Stomachaches in a full band setting and probably even get a taste of what’s to come from the new record. And actually it’s going to be the first time we get to bring some of these songs to life so… I’m real excited for that to be in Australia.”

TICKETS ON SALE
12PM THURSDAY MAY 26