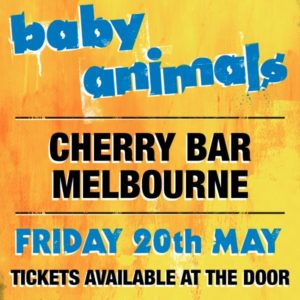 The Baby Animals original line-up (Suze DeMarchi, Dave Leslie, Frank Celenza & Eddie Parise) recently announced they’d be reforming for two shows only, to celebrate the 25th Anniversary of their iconic debut self-titled album. In a surprise announcement, the band have also confirmed that they will play a secret warm up show at Cherry Bar on AC/DC Lane in Melbourne tonight, 20 May, ahead of the Forum Theatre tomorrow night, 21 May.

The Cherry Bar secret warm-up show is limited to just 100 ticket sales with doors opening at 8pm sharp. Tickets are only available at the door and it’s first come, first served.

Also released today is Baby Animals 25th Anniversary Deluxe Edition. The double disc set features the original classic album, as well as a live concert recorded in Boston when the band was on tour with Van Halen in 1992.