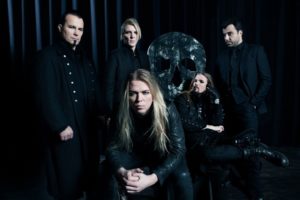 After blowing away crowds with their dynamic and heart stopping shows on Soundwave 2015, Finnish classical-metal maestros Apocalyptica will be returning for a Headline tour this September!
If there is one abiding truism that pervades art of every creed and style, it is that those with a unique vision are invariably the most likely to prevail. And as far as the fine craft of hard rock is concerned, few bands have captured a spirit of defiant individuality better over the last two decades than Finnish titans Apocalyptica.
Since their inception in 1993, the cello wielding quartet have redefined the boundaries between rock, metal and classical music in a truly unprecedented way: they’ve not so much rewritten the rule book as penned a brand new tome all of their own.

Formed initially by four true virtuosos at Helsinki’s Sibelius Academy, over the course of eight highly-acclaimed studio albums (with global sales totaling over four million) they have forged a reputation as an act capable of bringing fans from heavy and more traditional musical spheres together in euphoric celebration. From bow-eviscerating speed to sprawling, spine-shivering waves of sound, Apocalyptica’s sonic palette is as rich as it is diverse: Metallica covers, Wagnerian tributes alongside international Symphony Orchestra’s and collaborations with members of Slipknot, Soulfly and Bush are all a part of the bands extensive and multi faceted musical range.

‘There’s a lot of possible meanings to the phrase ‘Shadowmaker, at one level it can be about a person whose energy is so negative they choke out everything positive that you are trying to put into the world. At a wider perspective though, it concerns the notion that we have these faceless, nameless people who control the world we live in and make a lot of bad decisions on our behalf. It can be understood on many levels and I enjoy bringing the multiplicity of that sentiment to the musical message we are putting across.’ Eicca Toppinen
Prepare yourself for a night at the opera like no other. From windmills & riffage to tear jerking pin-drop moments and incredible feats of musicianship that will leave you speechless. You will be absolutely in awe of the sheer power emanating from the stage.
TOUR DATES
Wednesday, September 21: Capitol, Perth
Friday, September 23: 170 Russell, Melbourne
Saturday, September 24: Metro, Sydney
Sunday, September 25: Max Watts. Brisbane
Tickets on sale 9.00am Monday, May 9www.tickets.destroyalllines.com
Official Event Page:
apocalyptica.com destroyalllines.com   chuggentertainment.com
Presented by Destroy All Lines and Chugg Entertainment 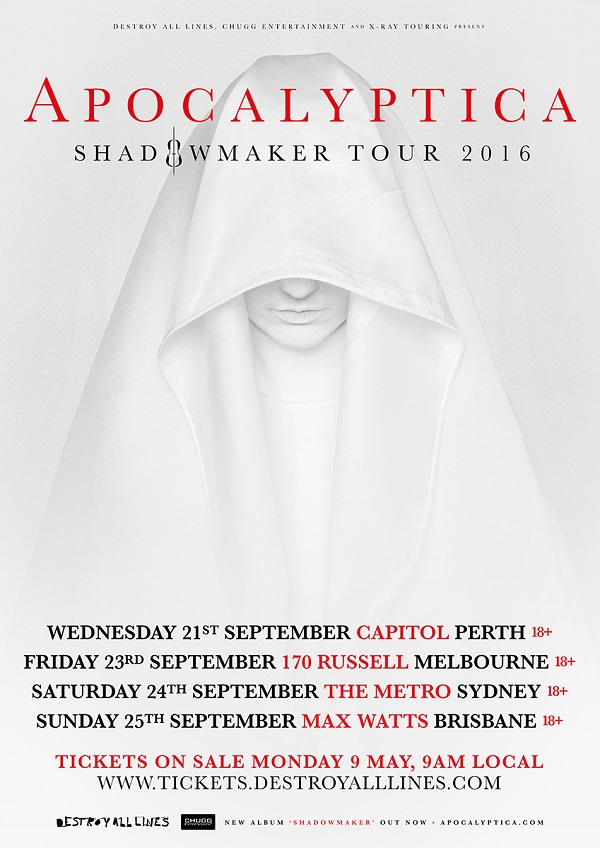