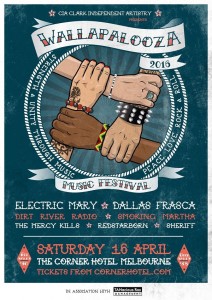 WALLAPALOOZA IS BACK! And it’s more fiery, exciting and poignant than ever. One of Australia’s longest running independent festivals remains an annual rockin’ good time for dedicated fans of live music. Taking inspiration from the recent furore raised in opposition to idiotic lock-out laws in the northern states, the 2016 edition of Wallapalooza brings together some of the most cinematic rock, stoner and metal acts to the Australian city that never sleeps, ready to shake Richmond’s Corner Hotel with a killer antipodean line-up.

Organiser Andy Clark, whose passion for live music runs both long and deep, is vehement that this be not remembered as the generation that enabled the death of live music. Wallapalooza seeks to promote cooperation in the Australian music scene, advocating for collective strength through bonding over a shared love of live performance, and a breaking down of the perceived barriers between styles. Understanding is the message of Wallapalooza 2016, outside of having a loud and rowdy good time of course. This event will kick off a series of live festival events to run across the country throughout the year under the Wallapalooza banner.

Punters can nab early bird tickets to this extraordinary event right now for only $25+bf via the Corner Hotel website. Get in early, not just because pricing goes up from Sunday March 13th, but because you may risk facing a sold out sign if you snooze on this stellar line-up.