STEEL PANTHER coming to check out Down Under in June 2016! 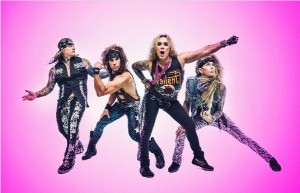 The band will be in Australia and New Zealand to promote the release of their Live Acoustic record and feature film, “Live from Lexxi’s Mom’s Garage.” However, don’t expect acoustic performances and cups of tea from the Steel Panther boys. Expect an all-out assault on your ears, moral standing and your private parts.

They hit Sydney at the Big Top Sydney 17th June, Festival Hall in Melbourne 18th June, Eaton’s Hill Hotel in Brisbane 20th June, Thebarton Theatre in Adelaide 22nd June and 23rd June at Metro City in Perth, then jump over to Auckland, NZ for the 26th June at Powerstation.

“Live From Lexxi’s Mom’s Garage” is the band’s first full length film, featuring a live ten song acoustic concert interspersed with comedic vignettes showcasing the band’s unmatched shenanigans and debauchery. The one hour film is now available on DVD from Steel Panther’s label, Kobalt Records, at SteelPantherRocks.com. The album only version can be found on Amazon, iTunes, and wherever music is sold.

For the uninitiated, Steel Panther was formed in 2000 and is Michael Starr (lead singer), Satchel (guitarist), Lexxi Foxx (bass) and Stix Zadinia (drums). The fearsome foursome are not stopping anytime soon. “Our drive to bring heavy metal back has not lessened,” concludes Michael Starr. “It’s actually gotten stronger. We’re not going to stop. I look forward to our continued world domination.”

Last in Australia for Soundwave 2014, the band played main stages at the festival and drew massive numbers to their bombastic set, simultaneously offending and salaciously delighting all in attendance. In recent times, they have almost entirely sold out their UK tour, which included Wembley Stadium and played main stage at Download Festival.