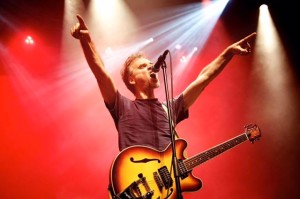 Following the success of their recent four month, 32 date National tour as ‘special guests’ of James Reyne, Moving Pictures return this May to celebrate the 35th Anniversary of the classic Australian album ‘Days Of Innocence’.

Often referenced within ‘Classic Australian Album’ countdowns, ‘Days Of Innocence’ spent seven weeks at the top of Australian Music charts and spawned the iconic single ‘What About Me’.

This May Moving Pictures, featuring much loved band members Alex Smith and Garry Frost, will hit the East Coast to celebrate this landmark event- with some added surprises!

Moving Pictures formed in 1978. Their debut album, Days of Innocence, was issued in October 1981 and eventually peaked at No. 1 on the Kent Music Report Albums Chart in February the following year. In January 1982 they released their single, “What About Me“, which reached No. 1 on the related Kent Music Report Singles Chart. Late that year Elektra Records issued Days of Innocence and “What About Me” in North America. The single reached No. 29 on the Billboard Hot 100 and appeared on the associated year-end Hot 100 list for 1983.

2015 saw the release of ‘Picture This’, a stripped back album featuring re-interpretations of past songs.