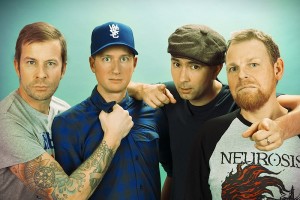 Grenadiers are relentless in pursuing their live domination of this nation, currently in the midst of an epic national headline tour. New single ‘Live Fast, Diabetes’ (complete with outrageous video) is an energetic, riffy joyride, ridiculously sing-alongable. Having toured with the likes of Unwritten Law, Supersuckers and British India recently, Grenadiers will have your beers raised high nice and early. One of the few domestic acts capable of giving their tour buddies a run for their money in the explosive live presence department.

Millencolin have spent the beginning of 2016 polishing their live chops tearing across on tour across Europe. The tireless quartet have just unleashed their outrageously fun new EP ‘True Brew’. Psych up, watch the video for single ‘True Brew’ HERE.

With one sold out Melbourne date and another just announced last week and already selling fast, enthusiasm for Millencolin’s library of melodic skate punk classic is clearly as rampant as ever. Get around all dates and ticketing info below, and be quick!

Sunday, 1st May – The Tivoli, Brisbane 18+
Tickets from tickets.destroyalllines.com, www.ticketmaster.com.au or Ticketmaster Outlets