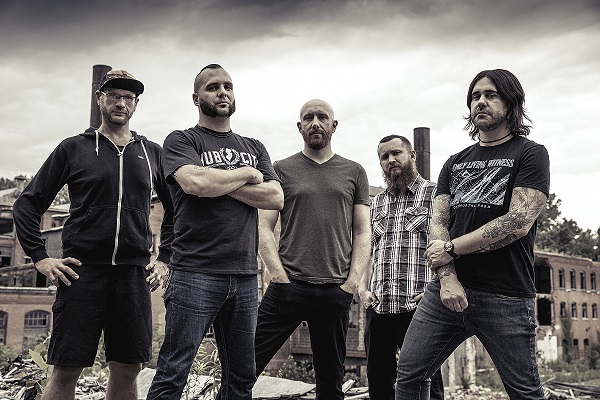 “I guess we just know each other’s strengths and weaknesses, we’re one of those bands that hasn’t gone through too many member changes and the guys that we’ve got are really trustworthy and we know our parts in the band and we rely on each other a lot, which is great that you have that sort of backup and support from your dudes.”

From release: Hard rock and metalcore pioneers Killswitch Engage are pleased to announce the release date for their seventh album, ‘Incarnate’. The album will be out March 11th on Roadrunner Records. There is a swell of activity surrounding KsE as the release of ‘Incarnate’ draws near. Rolling Stone selected Incarnate as one of the 25 most anticipated metal albums of 2016. Additionally, the band is currently gracing the cover of Revolver in a Star Wars-themed issue that reveals key details about the album.

Mike gave us a call to talk about the new Killswitch Engage album ‘Incarnate’, creating it, growth, the Star Wars shoot as mentioned above, and much more…

Thanks for your time again, Mike. Where do we find you at the moment?
Right now I am home, tomorrow is first rehearsals for we’re gonna do five days in New York City and we’re rehearsing a bunch of new songs from the new record and I guess each night we are actually going to be debuting a new song which is something that we’ve never done before, it was something our managers came up with and we said “Oh boy… we’ve got a lot of learning to do…” *laughs* because immediately after you record these things you forget them, so it’s a battle to regain all that knowledge.

Can you tell us about the title ‘Incarnate’ and what it represents to you?
It means in the flesh, so I guess I don’t know… I came up with it I should probably have a better answer than I don’t know… *laughs* I guess just the culmination of our work to this point, finally brought to the public, finally made it to a tangible form. It’s taken a while to get here.

Jesse’s return for ‘Disarm The Descent’ was killer, was it easier going into ‘Incarnate’ with the previous album under your belt?
Absolutely, but I guess the two differences were that all the instrumentals were finished for that record when we actually invited Jesse to join the band we had all the music done. Where this one, Jesse was in the mix, we constantly would send each other emails with demo tracks just to bounce ideas off each other, so he’s very much in the mix and calling some shots and talking about what he liked and what he didn’t like. So it was great to have him more cohesively in the mix this time around.

What was the creative process like with this album, did you set out to do anything differently this time around or was it in fact easier?
I think it was easier. Last one there was the stress of that we parted ways with our singer that people liked, do we have a job anymore? There was quite a bit of time between the last record and ‘Disarm The Descent’ to mull over possibly a new line of work and that’s why I think that album is very aggressive, we weren’t sure if we were ever going to do another record again, I know I was writing stuff that if we did put out another record it would be pretty brutal. One thing lead to another, Jesse joined the band and we put out that record thankfully and we’ve done another one now, we’re on that second, the next one and it’s just stress free, we know that we can trust in Jesse, we know we’ve got a great cog in the wheel of the machine that is Killswitch Engage. A trustworthy cause. So I think it’s just all systems go, so let’s recline the seats so to speak and full speed ahead.

The album is a monster, what was going through your mind when you got to hear the finished product?
I was just really happy, from the very beginning from the very first song that Jesse sent us with lyrics put down worry free, we were really stoked, we all shot him an email, he sent us ‘Hate By Design’ first and we were all excited, we said “you’re on a great path here, so let’s just keep it going” and luckily he did, I really can’t find fault with many of the lyrics on the new record at all which is something that I constantly think about, and it’s just really exciting to have someone as creative as him in the mix. Putting that cherry on the top of instrumentals you just never know how these songs are gonna turn out. Like you said, when you turn back after the mastering is done and you still have a smile on your face it’s a pretty awesome feeling.

Seven albums in, how do you feel you’ve grown as a band in that time to be where you are today?
Gosh, definitely gotten more grey hairs, in that way we’ve definitely gotten more elderly than we were before. I guess we just know each other’s strengths and weaknesses, we’re one of those bands that hasn’t gone through too many member changes and the guys that we’ve got are really trustworthy and we know our parts in the band and we rely on each other a lot, which is great that you have that sort of backup and support from your dudes.

It would be remiss of me not to ask, but when do you think we might see you back in Australia?
Gosh, I would’ve thought that we’d already been there by now. Right now the whole Soundwave thing really threw a monkey wrench into our whole touring plans. That was going to be the start of everything, now a couple of months later we’re starting in the United States, it would’ve been really fun to head over there and I asked management today, I said “wow, we’re doing a bunch of Australian interviews, does that mean we’re going?” and they said “No, we don’t have any plans just yet unfortunately.” I’d love to be able to give you some news on it though; I can’t wait to get back there.

You guys have always done really well here too, so hopefully you can get back sooner rather than later…
It’s just so much fun, the weather is amazing, the people are awesome, the crowds just are so stoked that you made it over there, it’s a very expensive trip to get over there but once you’re there, boy oh boy, it’s like lightening in a bottle, man, it’s really fun.

I think it was about four years ago at this time you were here for Soundwave and we sat down for a chat, man time flies…
Was that the Metallica one? That was so much fun. I got to see Kyuss Lives! every single day, I would run to the mainstage every single day just to see them, one of my favourite bands growing up for Kyuss, so the last opportunity to see that band really play live again was pretty awesome.

You’ve been doing this now for seventeen years this year and over your career so far, what’s the one thing you’ve always wanted to do but haven’t yet had the opportunity to do?
I’m gonna say what every band probably says, but tour with Metallica would be amazing. A dream come true, the fifteen year old me would be screaming inside I actually fear I might punish those guys by standing in their dressing room and staring at them a little too much. I feel bad for them in that way but holy smokes that would be a dream come true.

So obviously throughout a band’s career things change, but rather than asking what has changed, what for you has been the one thing that has stayed the same throughout your time together?
I guess the relationship between myself, Adam and Joel, the core members and three guys that really started the band and are still in the band, just awesome friends and I learn new things every day from those guys as far as instrumentation, they’re just so knowledgeable and I’m so not so it’s really like a learning experience every time we practise or every time we hang out those guys just show off and I pick up new things here and there all the time, it’s just a very creative learning experience.

I have to ask about the Star Wars shoot for Revolver, how much fun was that?
Holy smokes, the hardest part was keeping it from everybody because we were there for three or four hours, it felt like the shortest shoot we’ve ever done because we were having so much fun, we were taking behind the scenes phots and we couldn’t send them out to anybody or at least anybody that wasn’t in our immediate band sort of group. They were just so hilarious that we just wanted to share them with the world, so we were chomping at the bit and as soon as we got the OK we were sending them out everywhere, it was just a lot of fun, something to laugh about and something to remember and look back on it. It kind of reminded me of the ‘Holy Diver’ shoot, we had a lot of fun with that one as well, this one is with characters we really care about which is cool.

What did you think of The Force Awakens?
I really liked it, I wasn’t sure if a third Death Star was necessary, spoiler alert to anybody that hasn’t seen it… but its more in line with what I think Star Wars should look like, monsters and ships. Just give me all that stuff and whatever plot line, I don’t care.

Lastly, let’s look ahead to the future, finish this sentence for me, the one thing Killswitch Engage wants to do in 2016 is…
Spend one day or more at home *laughs* I know it’s very sad to say, but I feel this might be one of the biggest touring cycles of our lives which is awesome to have the work, and we have amazing fans, but now that we’ve been home for a little while I think we’ve become even more homebodies than we’ve been before, so I’ll be missing my couch, but that’s pretty lame to complain about.