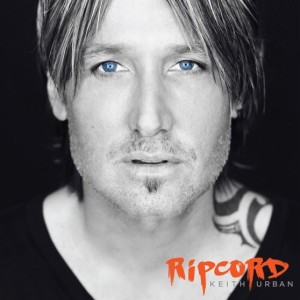 As excitement mounts for Keith Urban’s May 6th release of RIPCORD, and for his subsequent June 2nd launch of his “ripCORD World Tour 2016,” details of his eighth studio album are revealed. RIPCORD features a virtual who’s who of creative collaborators for an album that Urban says was his “most exhilarating album to make, both musically and creatively.”

“This album’s journey began back in January, 2015 and took me to a lot of unexplored people and places.” added Urban. “The end result was the recording and exploring of more songs then I’ve ever done before and carving that down to what I felt constituted RIPCORD.”

They include new collaborations with Jeff Bhasker, busbee, Greg Wells and Nile Rodgers, as well as those who Urban has worked with before, including Shane McAnally, Ross Cooperman, Dann Huff and Nathan Chapman all of whom worked with Urban on his previous No. 1 album FUSE , which debuted at #1 simultaneously in Australia (on both the Album and Country Charts), the United States and Canada.

“Getting to work with people like this was unlike anything I’ve envisioned before,” said Urban. “It’s the result of writing, reaching, imagining, and following the muse every step of the way.”

The RIPCORD album is available to pre-order from today in Australia HERE. Special album bundles are available directly from Urban’s website. From Keith’s website, fans can buy exclusive packages including t-shirt, poster, lithograph, and even a one-of-a-kind vinyl version, which includes the buyer’s name in the album credits.

Keith Urban has amassed over 16 million album sales worldwide and combined sales of 1.1 million units in Australia. His seventh studio album ‘Fuse’, was #1 and certified platinum in Australia, the United States and Canada and followed his #1 ARIA Album debut for 2012’s ‘The Story So Far’ (certified 3 x platinum in Australia) and #1 US and Australia for 2009’s ‘Defying Gravity’

You can catch Keith performing his new single “Wasted Time” this Thursday, March 31st on American Idol, (airing in Australia on Fox8 Friday April 1) as well as on The ACM Awards, which air on Monday April 4th at 10am (AET) on CMC in Australia. Urban launches his “ripCORD World Tour 2016” with Brett Eldredge and special guest Maren Morris on June 2nd in Kansas City and thus far will play more than 50 shows in amphitheaters and arenas through the U.S.