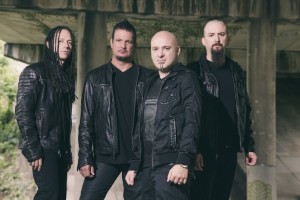 Frontier Touring are thrilled to be touring Disturbed for a string of arena dates this November in Australia and New Zealand. Joining the legendary 4-piece from Chicago at all Australian shows will be Melbourne hard rockers Twelve Foot Ninja.

After announcing a hiatus in 2011, multiplatinum, hard rock legends Disturbed unleashed their sixth LP and first release in five years, Immortalized (out now through Warner). Amassing over 12 million record sales and counting, a Grammy nomination, and a multitude of accolades since their humble beginnings in 1994, Disturbed’s return is saturated in the fiery determination fans love them for. Immortalized demonstrates a contemporary shift in their sound since the hiatus, while staying true to their signature metal roots a true Disturbed album.

Locally, Immortalized debuted at #1 on the ARIA Albums Chart, while their single ‘The Sound Of Silence’ nabbed the #3 most added track to radio recently and is at #23 on the ARIA Singles Chart this week. The momentum behind Disturbed builds and builds, with the video for ‘The Sound Of Silence’ currently sitting at #1 on the iTunes Video Chart while Immortalized sits at #19 on the ARIA Albums Chart. This kind of success for a heavier rock band is a fairly rare occurrence, further proving just how loyal Disturbed fans are.

‘Disturbed are back, and they’re on top form’ – Classic Rock Magazine

Live, Disturbed strengths lie in the incredible vocals of lead singer David Draiman, and skilful musicianship of Dan Donegan (guitar), Mike Wengren (drums) and John Moyer (bass). Fans are sure to be treated to new Disturbed tracks like ‘The Vengeful One’, ‘The Light’ and of course, ‘The Sound Of Silence’. Fans of their earlier material should also look forward to hearing old favourites lifted from The Sickness like ‘Down With The Sickness’ and Ten Thousand Fists smash hit ‘The Stricken’.

Currently touring Canada and North America, reviews of their live performances have been extremely positive.

Joining Disturbed for the entire Australian leg of the tour will be metal five-piece Twelve Foot Ninja. Purveyors of heavy fusion, the band have jumped from local buzz band to selling out capital city shows across Australia and performing at some of the biggest heavy metal and progressive festivals in both the United States and Europe. The Melbourne locals are also the only independent band and only Australian band to have received Best New Talent at the Golden Gods Awards – America’s only heavy music awards.

Their latest offering ‘One Hand Killing’ is the first track leaked from their forthcoming and as-yet untitled second album, set to follow the path created by tracks like ‘Mother Sky’, ‘Coming For You’ and ‘Shuriken’. Audiences at Disturbed’s Australian shows will be amongst the first to hear selections from Twelve Foot Ninja’s hotly anticipated sophomore album performed live.

A not-to-be missed show from a reinvigorated band of four ready to take to the stage and show Australia and New Zealand what they’ve been missing. Not since 2011 have they graced our shores, and if their 2016 performances are anything to go by, these shows will take fans on the ride of their lives. Secure your tickets now!