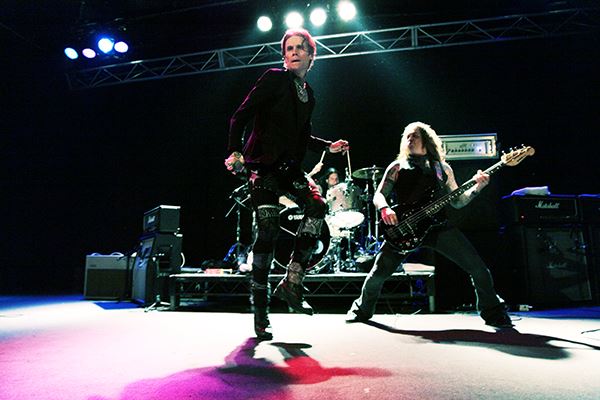 Buckcherry are just straight up rock and roll and judging by the crowd here at The Metro tonight that’s exactly what the people here need and are waiting for. Alas, we must wait just a little bit longer as we have two supports tonight…

Electrik Dynamite are up first and delivered a set worthy of their 80’s style which of course I love! Interesting fit for tonight but when I can feel like I’m listening to a super rocked up version the first Bon Jovi album from 1984 I’m set, I’m done, I’m happy. With an added level of heaviness, this six piece actually kicked a whole lot of ass. Long-time readers of the site may have seen them as one of our Best Things You’ve Never Heard back in 2011, maybe it’s time to revisit that. I’ll be in touch Electrik Dynamite…

From what felt like the 80’s we move to what feels like some classic 70’s style old school rock and roll with Palace Of The King, and what I dig about this band is that they’re musical, and what I mean by that is that they just jammed out for the best part of almost ten minutes and it was amazing. There is some serious talent in this band and that’s what it’s all about for me. Throwing in a little bit of The Doors for good measure, these guys have everyone interested and well played by them. Scream for me Sydney…

Buckcherry return to Sydney with their brand of Rock and Roll in their first headline tour in many a year and they waste no time in showing us what they’re all about kicking it off with ‘Lit Up’ which is somewhat unexpected but absolutely loved as an opener. I’ll sure I’ll probably say this more than once tonight but Buckcherry as a band epitomize what rock and roll is about and are 100% no bullshit. Also the only rock band that can truly get away with the use of a tambourine and you know what? Fuck you, tambourines rule!! Josh Todd as a front man is exactly what you want in a band, he oozes rock and roll and sounds as good as you want from this band! Although what you shouldn’t do is focus solely on Todd as watching in particular the guitarists in Keith Nelson and Stevie D as they keep it entertaining also and as the first song finishes the cheers cement why Buckcherry can keep coming back to Australia, what a start to a show.

“We are ready…” ‘Broken Glass’ from ‘15’ is up next and is as tight and rockin as expected as they rock end it with an extended outro and kudos to follow. We ‘Bring it on Back’ with its sleazier vibe as we get almost funky with ‘Next 2 You’ featuring some magnificent use of a ride cymbal and also the fourth appearance of the tambourine, a feature I feel we’ll see much more this evening. Oh yeah, it stays out for ‘Tired of You’ as the band try to get Sydney dancing and rightfully so as this one is all groove.

It’s time to slow it down a little with one of, if not the band’s best ballad in ‘Sorry’ and as rock and roll as the band are, they can still get a little sensitive and deliver the heartfelt goods when they need to. ’15’ was such an important record for the band and this song from it helped with that importance and cheers to a kick ass song. Josh’s shirt comes off to a shriek from many here and we get rockin’ again with ‘Get With It’ surprisingly featuring Mr Tambourine which I’m still loving. The question of “do you like rock and roll?” Is met with a rousing yes as the next one is dedicated to big tits and a round ass with ‘Slammin’ following and this one has one hell guitar riff underlying it that really kicks it out and I’m loving it as Keith solos this one perfectly, man his tone is killer, such a compliment to the band.

A song about Josh’s attire ‘Tight Pants’ is next as he gets a little choreography in, now not to extent of the ‘Ridin’ video but enough to shake it. ‘Gluttony’ follows and I want it I want it I want it I want it… This one is going over amazingly as the crowd truly get into it and the floor starts moving. Of course ‘Gluttony’ is followed with ‘Greed’ which is the answer supposedly as this middle of the road rocker takes its place in the set. ‘The Feeling Never Dies’ is another slower track and one that stands out as it’s truly a great fucking song! Everyone knows I’m partial to a ballad and this one is the perfect one to slip into the set.

We’re already headed toward the end of the night, and what comes along with that? ‘Crazy Bitch’ and what a time to do so… This song is quintessential Buckcherry and truly the song that many here probably came to hear… It’s a song perfect for the live environment and it always delivers. The just over ten minute version showcased the talent of the band as they all took turns soloing and showing us how good they are. You can tell that everyone was happy with that one.

Back for the encore and we get into the ‘Fuckcherry’ part of the evening to take us out. ‘Say Fuck It’ is a huge crowd favourite but “I don’t care…” I kid, I do, was just singing along. I absolutely love the guitar in this song and its catchy vibe is made solely to be played live and here we are. The set closes tonight with ‘Too Drunk…’ which goes from rocker to groover as the band say goodnight to what was a great crowd and a great set.

Buckcherry you are welcome back anytime. All hail Rock and Roll!

Photo By: Annette Geneva – Every Day Is Saturday

Set List:
Lit Up
Broken Glass
Bring It On Back
Next 2 You
Tired of You
Sorry
Get With It
Slamin’
Tight Pants
Gluttony
Greed
The Feeling Never Dies
Crazy Bitch
Say Fuck It
Too Drunk…