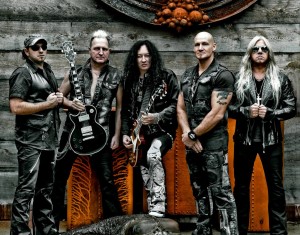 Touring Australia for the very first time in their distinguished and illustrious career, Primal Fear have one single goal and mission on hand: perform in Australia for the first time ever; perform the best ever show we can ever perform for Australia; and absolutely smash out a set that will destroy and completely rule the memories of the people that attend; hence – we are coming down under and will be Ruling Australia in 2016!

One of the most notable traditional/power metal bands of all times Primal Fear will leave nothing behind as they will perform tracks off their new album ‘Rulebreaker’ along with all the classic and fan favourite tracks. Fronted by one of the best vocalists of the genre, Ralf Scheepers (ex-Gamma Ray) and taking in the legendary Mat Sinner, Primal Fear are a force to be reckoned with and have a career that has spanned over 19 years producing countless chart topping selling albums. Their most recent release ‘Rulebreaker’ entered the US Billboard Current Hard Rock Albums at #19, the German national chart at #19, Switzerland at #35, Japan at #11, Czech Republic at #15, Austria at #60 and Sweden at #12.

Black Majesty will be supporting Primal Fear in Melbourne and they will be playing an extended set on the night in what has shaped up to be a sensational line up and treat for fans of the genre in Melbourne. Black Majesty is arguably Australia’s premier melodic Power Metal artist and they will be performing tracks off their recent album ‘Cross of Thorns’ along with a host of their classic fan favourites.

There will be on offer a STRICTLY limited VIP meet and greet pass available for only 15 people per show. The VIP Meet & Greet fan pass is obtainable online from Metal Obsession.