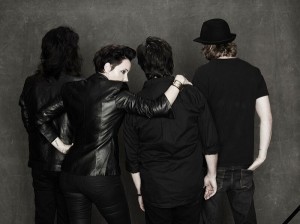 Celebrating 25 years since the release of their iconic self-titled debut album, Baby Animals are set to play two huge shows in 2016 at Melbourne’s Forum Theatre on May 21 and Sydney’s Enmore Theatre on May 28. Both will include two explosive sets each night; the first being a celebration of the past 25 years performed by the current line up (Suze DeMarchi, Dave Leslie, Mick Skelton and Dario Bortolin), and the second will be the debut album in full performed by the original line up of Suze DeMarchi, Dave Leslie, Frank Celenza and Eddie Parise.

With their 4 x Top 50 singles, Early Warning, One Word, Rush You and Painless, audiences are guaranteed a nostalgic injection as they re-live the live experience of a band that broke Australian music history records with their breakthrough release, which saw them at #1 for 6 weeks, win multiple ARIA Awards, and reach 8 x Platinum sales in Australia and in excess of 1 million album sales worldwide.

“It seems like only yesterday that we were at Sound Level rehearsal studios in Sydney beginning this journey that’s lasted 25 incredible years. I feel really privileged to be celebrating all the great times with my band mates.

We’re going to do something really special next year. The Baby Animals will be performing songs we haven’t played for years, material that many BA fans have never heard before. And perform the first album from start to finish, which will be a first for us and the fans. We’ve also unearthed live tapes, b-sides and demos – many of which have never seen the light of day – for a new album, BA25.

Everything old will be new again. We can’t wait.” – Suze DeMarchi

The new album, BA25, includes a live concert recorded in Boston while on tour with Van Halen, plus unreleased tracks, B-sides and pre-studio demos that have never been heard, making it an essential part of your Aussie rock music collection.

BA25 (out 20th May via Liberation Music) is available for pre-order exclusively via Social Family Records Store or ticketing bundles HERE: 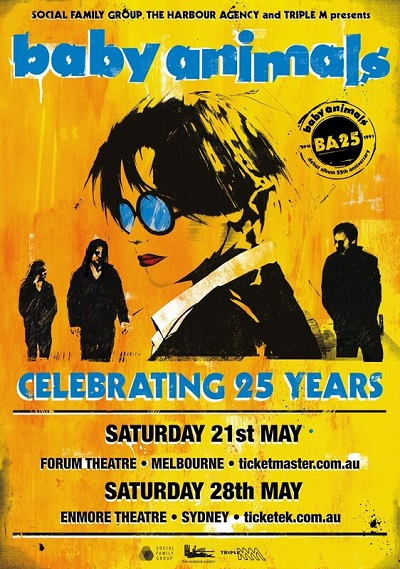 Their first TV performance in the USA was on Letterman

While on a support tour in Europe in 1992, the Baby Animals stormed the stage and stole the encore from Bryan Adams. Suze was dressed as Bryan, but they played a Baby Animals song much to the confusion of the stadium crowd in Milan

It was the highest selling Australian debut album ever, until Jet released Get Born in 2003