The Dead Daisies – With You And I 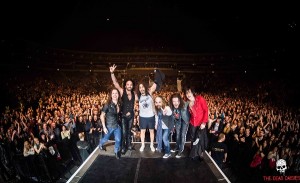 The Dead Daisies new album, ‘Revolución’ has been received incredibly well in Australia.  Rave reviews from media including Rolling Stone Magazine’s editor Rod Yates stating, “This is up there with the best hard rock releases of the past decade”, reaching No. 3 on the Australian Independent Record Labels Association ‘Air Charts’, airplay on radio stations across the country with singles ‘Mexico’ and ‘Empty Heart’, sell out shows on the 40th Anniversary tour with KISS, and an unforgettable time on the Norwegian Pearl, KISS Kruise V from Miami to Jamaica.

Now, they are in Europe, to meet up with Whitesnake on their ‘Purple’ tour, with the first stop… Russia.  The Dead Daisies have travelled extensively over the last few years, but this is a first visit to Russia for the band.

With all the problems in the world at the moment, in response The Daisies release their new single ‘With You And I’.  This track is not a political statement, but a call out to everyone that “It all starts With You And I”.  It touches on all the current issues happening on our planet.  It addresses many controversial subjects such as Refugees, Religious Conflicts, Wars, Climate Change and Corruption in our society.

The video features footage from some of the biggest tragedies and recent failings of the human race, starting with the 9/11 terror attacks, melding into wars in the Middle East, global warming, famine and the recent migration of refugees from war torn Syria.  The underlining message of the video is a positive one however, if we want to make the world a better place it is possible.

This thought provoking video premiered across Europe recently on some of the most influential music websites including Classic Rock Magazine, Rockmuzine, Metal X and Hard Force. The video and the message behind it transcends music…

Singer and songwriter John Corabi about the song and the video:  “I think it is about the many things that we daily experience in the news: the war in the Middle East, religious disputes, force of arms … with the video we just wanted to show some examples of this everyday madness and say, ‘If you really want a change, then it begins with you at home … It all starts with you and me.’  It would be quite simple.”

See ‘With You And I’ from The Dead Daisies here: