DEVIL YOU KNOW are the eight artist confirmed for Soundwave 2016! 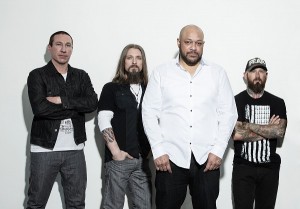 DEVIL YOU KNOW began as a journey into the unknown. Howard Jones (Ex Killswitch Engage), Francesco Artusato (All Shall Perish), John Sankey (Fear Factory, Divine Heresy), and Ryan Wombacher (Bleeding Through) all shared a determined strength born of the tension between tragedy and ambition, the fight between creative satisfaction and musical abandon, and the might of collective experience have coalesced with powerful aggression and brilliant precision.

‘They Bleed Red’, the band’s ferocious new album extinguishes any so called “sophomore slump” without mercy. It’s the sound of primal bloodlust. A journey through rage, despair and every emotion in between, DEVIL YOU KNOW represents the most assured, impassioned, authentic, and versatile work of each of the band members’ careers thus far. What’s most exciting of all? DEVIL YOU KNOW has just gotten started. The group who took home Best New Artist at Metal Hammer’s Golden Gods Awards in 2014, share legions of fans, millions of albums sold, and we are thrilled to have them performing at Soundwave 2016.
Early Bird tickets are now available via www.soundwavefestival.com

DEVIL YOU KNOW join Bring Me The Horizon, Refused, Bullet For My Valentine, Northlane, Dead Letter Circus, Lordi and Failure: Appearing at Soundwave 2016