Chris DeMakes of Less Than Jake 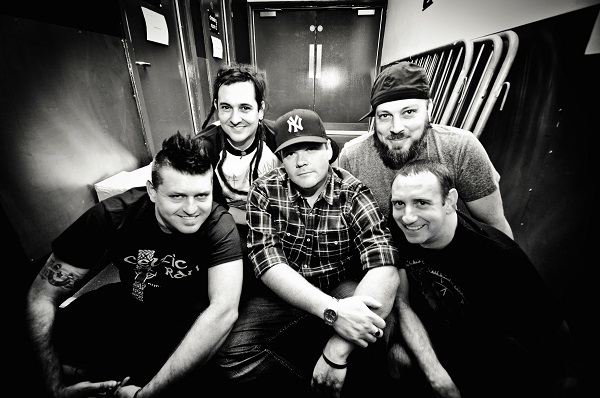 “…it’s kind of like we know the ten, eleven or twelve songs that we have to play that are fan favourites or so to speak, and then from there we just kind of try to sprinkle in and try to represent every era of the band and then you know try to make ourselves happy too, we like to entertain ourselves so in turn it’s fun for the audience.”

From Bio: Playing music is about moments. A collection of great moments defines an amazing record. An avalanche of powerful moments tumbles into an engaging live show. The moment when band and fan become one and the same, the moment of interaction, is the type of moment that lasts forever. Now over twenty years into its pioneering journey, Gainesville, Fla., natives Less Than Jake have had their fair share of moments. For a band obsessed with interacting with its fans, both online and after shows; for a band that is so concerned with making sure the fan gets the perfect experience, with well-known hijinks in every live performance; and for a band that is so passionate when writing new music, this begins to seem like an even longer amount of time. A lot of moments add up over two decades – teenagers grow into men over two decades – dare we say, things change?

In wonderful Florida we caught up with Chris of Less Than Jake to talk about the bands return to Australia for their shows with Reel Big Fish, as well as new music, changes over time and much more…

You’re of course heading back to Australia with Reel Big Fish, such a great pairing, what can we expect from what is sure to be a fun night?
Lots of familiar songs if you’re a fan and just high energy, and just a really good time.

That’s just what we love down here, have you found that the Australian audiences really get into your shows?
I’d like to think so, you guys are a crazy bunch, you guys drink a little more than the rest of the world so that helps *laughs*

Being to Australia before and playing festivals like Soundwave, it always interests me in asking what for you is the biggest difference in playing a festival compared to club shows?
You know I always say that when you’re doing the festivals for two to three weeks that you want to be back in the clubs cause you’re bored of the festivals, and conversely when you’re doing the clubs you’re like after two or three weeks or a month of that you want to be doing the festivals *laughs* so the grass is always greener, but they’re both great in their own way.

You’ve been doing this co-headline tour with Reel Big Fish across The States to great reviews, what’s been the craziest thing to happen on the tour so far?
Oh geez, let me think, probably nothing crazy just as you know I don’t use the word nostalgia in a bad light but it’s like everybody that listened to most of these bands in the nineties, they’re back now, it’s like they might have taken a few years off and had families and this and that and now it’s like ‘Oh my God Reel Big Fish and Less Than Jake are coming, it’s an event, we’re gonna go see it’ and it’s sold out almost every night and it’s absolutely crazy, it’s a lot of fun.

With so many albums under your belt, how do you go about putting a set list together for shows these days?
That’s a good question, it’s kind of like we know the ten, eleven or twelve songs that we have to play that are fan favourites or so to speak, and then from there we just kind of try to sprinkle in and try to represent every era of the band and then you know try to make ourselves happy too, we like to entertain ourselves so in turn it’s fun for the audience.

Being here a number of times before, besides the shows, what’s your favourite thing to do in Australia?
Favourite thing in Australia… that’s a really good question, probably when we went to Darwin one time because it was just so far removed from anything I’ve ever done in my life so that was one thing, it wasn’t like I do that every time… Probably I just love how laid back everything is, everywhere you go, I love hitting the beach when I’m there.

Well you’ve been to Darwin more times than I have so…
*laughs* Yeah it was pretty intense.

It’s been almost two years since ‘See The Light’ have you guys had time to even think about a new album or new music?
No we’ve all been compiling ideas separately and we’re gonna start working on something this Fall here in The States when we’ve wrapped up touring. We’ve been pretty much on the road since the record came out non-stop touring so we haven’t had much of a chance about thinking of getting into the studio. We’ve always come home, decompressed, got our ideas together and worked on a record.

You’ve been doing this now for twenty three years, and a lot has changed in the music world in that time, what for you has been the most notable change in the way that the band works and or makes music now compared to those early days?
Wow, well you can fix my horrible out of tune vocals now very easy, so that’s changed *laughs* just the technology aspect of it, we started pre-internet essentially so everything was different. If you wanted to get a response from a band member they had to physically write you back, put it in the post and send it to you, it wasn’t instantaneous. So I’d like to think that we’ve kept up with the technology and that’s one of the reasons we’re still here, we never shunned it.

Let’s jump back to ‘Pezcore’ it turned 20 this year! Do you have a great story or memory about what it was like releasing that debut album back in 1995?
Yeah actually I had quit college or university to do the band and my parents weren’t too happy to say the least, and my Dad was in North Carolina visiting my brother who was off at college there and he went into a record store and saw our CD. That to me was like ‘we’re a real band now, we have a CD’ because back then if you had a CD you were something because everyone had cassettes and you couldn’t just burn a CD really quickly, so my Dad called me and gave me some vindication of what I was doing, that was great.

Then you guys reissued it back in 2002?
Yeah I think we’ve reissued it twice actually *laughs*

So no plans for a twentieth anniversary release because well no need for a third?
Yeah that was probably the reason we didn’t do it, there was nothing left to tack onto it, there was no new bonus tracks or anything special to do for it so we kinda left it alone and haven’t really had the chance to do anything to market because we’ve been on the road.

So let’s talk about Ska and Ska Punk or whatever we want to call the genre, there are still a few bands left and still going but a lot of bands did come and go. What do you think it is about that style of music that people really still dig these days?
I think ultimately for us and Reel Big Fish it came down to the songs, the songs and the lyrics they touched people in some way. You know Ska was kinda looked at as this goofy kinda fun genre that came and went, but the bands that had songs I feel, oh and the Mighty Mighty Bosstones, the bands that had songs are the ones that are still doing it. And the fact that it’s a fun genre, you can’t help but have fun when you go to one of our shows.

Lastly, let’s look ahead to the future, so finish this sentence for me, in 2016, Less Than Jake will…
Put out a new record *laughs*

Catch Less Than Jake and Reel Big Fish on tour in Australia at the following dates: