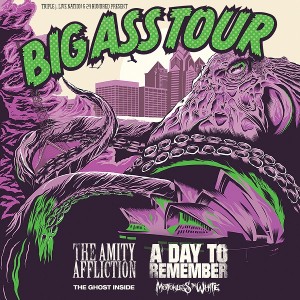 THE AMITY AFFLICTION and A DAY TO REMEMBER will join forces this December to bring one of the biggest rock shows of the year to Australia. The BIG ASS TOUR will play to 60,000 fans as it hits arenas in Sydney, Perth, Adelaide, Melbourne and Brisbane, withMotionless in White and The Ghost Inside completing the stellar bill.

Tickets for all shows go on sale at 10am, Tuesday September 1.

The Amity Affliction are a modern phenomenon and Australia’s biggest and best-loved heavy band. With two consecutive Number 1 albums and a string of sold out tours already accomplished, the band will perform for more fans than ever before on the BIG ASS TOUR, their only major capitals run this year. Their decade of dominance was recently chronicled in the #1 ARIA-charting DVD ‘Seems Like Forever’, which was certified Gold in its first week on shelves. Their latest album “Let The Ocean Take Me” was their third consecutive album to reach Gold certification, and made Amity a household name around the country.

Bassist and vocalist Ahren Stringer said, “We’re psyched to do this tour with our new friends A Day To Remember! This is the biggest tour we’ve ever done, and it’s going to be something special.”

A Day To Remember are an international success story. A testament to the power of hard work and integrity, the band have forged their own path from a small town in Florida to magazine covers and festival main stages around the globe, including a stint as headliners of Soundwave 2014. Having sold over 2 million albums worldwide, the release of their newest full length ‘Common Courtesy’ in 2013 saw them land at #1 on the Billboard Hard Rock charts and garner over 50 million streams on the record to date. The self-released record cemented their standing as one of the most forward-thinking, popular and critically acclaimed bands in rock. the BIG ASS TOUR promises to elevate them even further.

Vocalist Jeremy McKinnon Said, “ Australia is our favorite destination around the world, so we teamed up with our friends The Amity Affliction for one Big Ass Tour!”

The Amity Affliction and A Day To Remember will be joined by their friends The Ghost Inside and Motionless in White, two of the hottest bands in the scene. Los Angeles’ The Ghost Inside are keepers of the positive hardcore flame, fuelled by last year’s phenomenally powerful Epitaph release ‘Dear Youth’ and a reputation as artists who will never give up the search for truth and honesty. They’ve graced the covers of Blunt and Hysteria Magazines, and have made Australia a second home with a constant presence on the national touring circuit. Motionless In White make their first club show appearances in Australia after two performances on Soundwave, and will be bringing their highly successful album ‘Reincarnate’ to fans for the first time after it debuted at #13 on the ARIA charts and #9 on the Billboard 200.

TICKETS ON SALE
10AM TUESDAY SEPTEMBER 1