JOHN FARNHAM set to perform for The Last Time at Sydney’s Entertainment Centre! 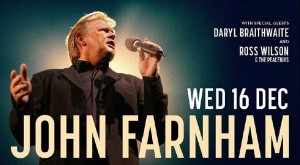 John Farnham has announced today that he will be performing at the Qantas Credit Union Arena (formerly known as Sydney Entertainment Centre) on Wednesday, 16 December 2015 for one show only to farewell the much-loved venue.

John holds the record for the most performances at the Qantas Credit Union Arena by an Australian artist and this special, farewell concert will take that number to 76. Including his solo shows (40), John has appeared on stage at the Arena with Jesus Christ Superstar (26), The Main Event shows with Olivia Newton-John and Anthony Warlow (8) and most recently on the Two Strong Hearts tour, once again with Olivia Newton-John.

John’s unmatchable record with the Qantas Credit Union Arena was honoured in 2002 when the venue named its VIP function room after him.

“I’ve been playing the Arena for over 30 years now and they’ve been some of my most fun and memorable shows. I can’t wait to get back and raise the roof one last time – get ready for one hell of a farewell party!” John said.

John Farnham, AO is one of Australia’s most successful artists and has been “The Voice” of Australian music for over 30 years. In September 1967, at the age of 18, he was signed to a recording contract and in December of that year released the single, Sadie the Cleaning Lady, which became the biggest-selling single in Australia at that time. A string of hits following including One, Raindrops Keep Falling on My Head, Help, Pressure Down, Burn for You and the anthem, You’re The Voice, which sold a million copies in Europe and reached the Top 10 in England. His watershed album, Whispering Jack, held the No. 1 position on the Australian album charts for a total of 25 weeks, and is still the highest-selling album in Australian history.

John’s most recent album release, Two Strong Hearts Live, spent three weeks at No. 1 on the ARIA Album chart. The companion DVD is scheduled for release on 21 August 2015, ahead of its exclusive premier screening on Channel 9 on Sunday, 23 August – the night before tickets go on sale.

John’s special guests for this final show are Daryl Braithwaite and Ross Wilson & The Peaceniks.

Tickets for this one night only, farewell show go on sale at 10.00am on Monday, 24 August and are expected to sell fast!

With Special Guests: Daryl Braithwaite and Ross Wilson & The Peaceniks.